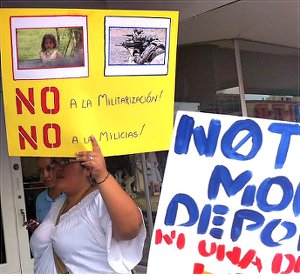 Oct. 20 — The “National Caravan in Solidarity with the Children and Families on the Mexico and Texas Borders” is now concluding its multi-city trip, which began in New York City on Oct. 10 and is ending today in McAllen, Texas.  The school bus, filled with caravanistas, has received warm welcomes at every stop along the way.

The caravan is fundraising to help the South Texas Human Rights Center install water stations for migrants. It also aims to redefine the upsurge of Mexican and Central American migrants — tens of thousands of children and families detained at the border — from a border crisis to a major refugee crisis.

Caravanistas are raising awareness about and organizing against federal and state governments’ abusive and inhumane measures against migrants, including deportations and detentions. Opposing militarization at the U.S./Mexican border is also a key issue. Texas Gov. Rick Perry has called out the National Guard, and military personal are staffing checkpoints as far as 100 miles from the border.

In Brownsville on Oct. 19, more than 100 protesters voiced opposition to the enormous number of deportations and growing militarization of the border.

Eyewitness reports by caravan participants will be published in upcoming issues of Workers World.