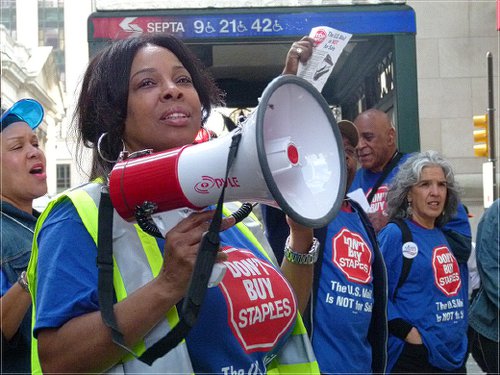 A Staples store in Center City, Philadelphia, was picketed Oct. 7 by members of the American Postal Workers Union, the National Association of Letter Carriers and the National Postal Mail Handlers Union. The postal workers and community groups were picketing as part of a national campaign to boycott the office supply store because of its refusal to stop turning its store counters into quasi-post offices. They were joined by members of the Communications Workers of America, the Philadelphia Federation of Teachers, the American Federation of Government Workers and other unions.

On Oct. 10, APWU President Mark Dimondstein called for the resignation of Postmaster General Patrick Donahoe, saying he is on “a rampage to cut, cut, cut” and has no plan to save the United States Postal Service, which shed 37,400 jobs in 2013 alone and is projected to eliminate approximately 169,000 jobs by 2022. (Politico, Oct. 10)

The replacement of postal clerks earning living-wage jobs with Staples clerks earning poverty wages is privatization and an attack on all union workers and community activists fighting for the right to wages and benefits adequate for a decent standard of living.