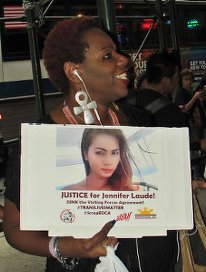 A rainy New York City rush hour didn’t deter over 50 Filipino-American activists, transgender people and supporters, who rallied outside the Philippines Consulate on Oct. 15, chanting “We say no to the VFA! Fight transphobia every day for Jennifer Laude!”

Laude, a transgender Filipina woman, was found strangled in a hotel room in Olongapo City, the Philippines, on Oct. 11. A U.S. Marine suspected of her murder is being held by Pentagon authorities aboard a Navy ship.

“We are outraged that another innocent life has been taken away because of the ongoing infestation of U.S. troops who have no right to be in the Philippines in the first place,” said BAYAN-USA Chair Bernadette Ellorin at the rally.

She went on to say, “We are equally incensed that the U.S. whisked the suspect Marine away and is holding him aboard an American ship, rather than turning him over to Philippine authorities.  This shows how the U.S. has no respect for Philippine sovereignty or our country’s legal system.”

“This insult to Philippine sovereignty is no surprise, given the history of U.S. militarization in the Philippines.  It also exemplifies exactly why Filipinos are opposed to the Visiting Forces Agreement and the Enhanced Defense Cooperation Agreement. Instead of rushing to implement the EDCA, [President] Aquino should stand up for Philippine sovereignty for once by ensuring that the Philippines asserts complete jurisdiction over Jennifer’s case,” Ellorin explained.

The October 15 action was called by the BAYAN Queer Caucus, GABRIELA New York and Barangay New York-LGBTQ [email protected], and supported by TransJustice of The Audre Lorde Project, the New York City Anti-Violence Project, the International Action Center and others.