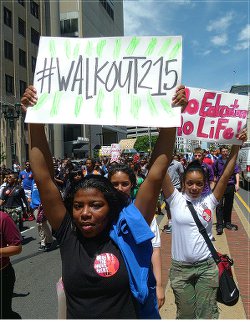 Philadelphia students walked out of classrooms in May 2013 to protest the proposed elimination of all extracurricular programs in the city’s public schools. Thousands of students from 27 high schools and middle schools took to the streets, chanting, “No ifs, no buts, no education cuts” and “No education, no life.”
WW photo: Joseph Piette

All five unelected members of the School Reform Commission voted to cancel the School District of Philadelphia’s contract with the more than 15,000 teachers, nurses, librarians, counselors and other members of the Philadelphia Federation of Teachers. This Oct. 6 vote was a sneak attack at a virtually unannounced meeting.

The SRC’s immediate pretext was to save approximately 1.4 percent of the budget by forcing teachers to pay for their own health care. This effectively cut district teacher pay by $43.8 million. The PFT contract’s cancellation, however, was about more than saving pennies on the dollar. It also furthered corporate “education reform,” including busting unions, limiting democracy and privatizing public education.

Racism, austerity and no democracy

But Pennsylvania law makes the PFT the only union without the legal protection to strike. In 2000, after the district’s attempt to privatize the entire district and the PFT voted to strike, the legislature passed this anti-union law. This same law also created the five-person unelected SRC. The law has been untested since it was passed in 2001, so how officials will enforce it to stop a strike remains unclear.

Now the SRC oversees all 300 public schools in Philadelphia. Eighty-six of these are charter schools, operated by private management groups that notably lack public accountability even though charters get much more per-pupil funding than traditional public schools.

Some 85 percent of all students in Philadelphia’s school district are people of color, and 87 percent are classified “economically disadvantaged.” Denying Philadelphia communities any control over their school district thus amounts to a racist attack on poor people’s democratic rights. This is just like in Detroit, where the 80-percent African-American city suffered severe budget cuts under emergency manager Kevyn Orr.

In Philadelphia, the SRC has been working methodically to destroy public education. The Boston Consulting Group, formerly led by Mitt Romney, designed the SRC plan. This plan originally called for closing over 64 public schools, laying off thousands of teachers and other support staff, and outsourcing over 4,000 unionized jobs.

The BCG, a notorious outsourcing firm worth billions, was earlier brought in to bust unions at Chrysler, General Motors and school districts such as New Orleans, which now has no traditional public schools.

The SRC has strong connections to the Philadelphia School Partnership, a strong pro-privatization group whose board of directors includes corporate executives from Goldman Sachs, Credit Suisse and connections with other banks.

In 2012, the SRC lobbied to have the unilateral right to impose any contract terms on the teachers and support staff of the schools. This effort failed.

Earlier in 2014, over 40,000 people in Philadelphia signed a petition for a referendum on whether to abolish the SRC. Should this referendum pass, however, it will not be legally binding.

In 2003, Wall Street banks lobbied for Pennsylvania and other governments to allow municipalities and school districts to agree to “debt swap” agreements. Since the Federal Reserve began lowering interest rates in 2003, these agreements kept school districts and local governments locked into fixed interest rates much higher than current market rates.

In 2002, investigative reporters discovered that this was part of a series of scams big banks have carried out since 1991. This one became known as the LIBOR scandal. It transferred billions of dollars from public treasuries to the coffers of Wall Street bankers.

As a result, the Philadelphia School District paid $276.4 million in 2014-2015 or 9 percent of its yearly budget just to pay interest to these same banks that had received trillion-dollar bailouts from taxpayer money earlier.

The city of Philadelphia has already attempted to sue to get back some of this money stolen from students and teachers. The SRC could do this too or just stop paying the banks, leaving enough money to avoid all budget cuts. But the pro-big-business SRC members have ignored these possibilities for months now.

With no pay raises for two years, which is an effective pay cut of $2,862 the first year and $5,725 for the second year (Working Educators blog), each teacher has lost $8,587. For the over 13,000 teachers that’s an estimated total pay cut of $110 million. Meanwhile, fewer teachers and support staff mean bigger classes and more work. In some schools only teachers are available to clean bathrooms.

So how could the PFT stop this? Like other public sector unions, the PFT needs community support. The PFT’s Caucus of Working Educators (WE) aims to connect rank-and-file unionists with parents and the community. Inspired by the 2012 Chicago public schools strike, WE is looking for ways to galvanize public support for public education and connect the struggle of students, teachers and support staff to the broader challenges facing the working class in a period of austerity.

Students have been a strong pillar of support for teachers. Two days after the district cancelled the contract, students at three high schools walked out. In the past three years, major walkouts have brought out thousands of students to fight for a quality public education.

No politician can guarantee the future of public education. Only students, teachers, parents and the community united in a struggle against the SRC, the corporate reformers and the banks will guarantee the human right to education for all students in Philadelphia.

Matty Starrdust contributed to this article.