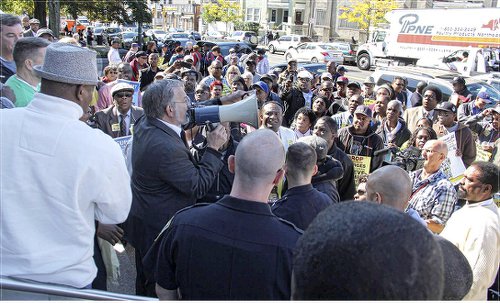 Dorchester, Mass. — It was the second pre-trial hearing for Stevan Kirschbaum, a founder of Steelworkers Union Local 8751 of Boston’s school bus drivers and chair of the union’s Grievance Committee.

As with the first court hearing in this saga of company repression versus union militancy, his fellow drivers, other unionists and supporters from the community once again packed the courtroom here on Oct. 6. Some 300 turned out to show they completely reject the bonus charges filed against their brother by the multi-billion-dollar transnational Veolia Corp., which holds the contract to run Boston’s school buses and has been trying to undermine their union.

Team Solidarity, the voice of the militant umbrella group called United School Bus Union Workers, which has brought together bus workers from several cities in the greater Boston area, had called for packing the court on this Solidarity Day 6 to demand that the anti-union, frame-up charges against Kirschbaum be dropped. 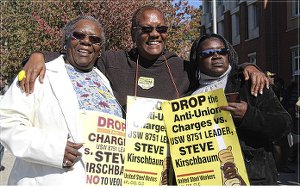 The call for solidarity was heeded. The overflow crowd, mainly school bus drivers who came originally from Haiti and Cape Verde, packed the courtroom, including sitting on the floor, and also held a picketline outside the courthouse in Dorchester, Mass.

Kirschbaum had been hit by Boston police with four bogus felony charges in early July. The charges were issued after a June 30 rally and march in the school bus yards demanding that Kirschbaum, along with three other union leaders — Andre Francois, Garry Murchison and Steve Gillis — be reinstated to their jobs as drivers following their illegal firing by the France-based Veolia conglomerate last November. Veolia is notorious for union-busting and privatizing tactics, here and worldwide.

Inside the courtroom, the Veolia/Boston police frame-up began to unravel. The court dismissed two of the felonies: breaking and entering and malicious destruction of property. People’s lawyers Barry Wilson and John Pavlos provided a militant and defiant defense, pounding away at the lies by the state and Veolia, revealing them to be fabrications and an outrageous frame-up.

Not a shred of credible evidence was provided by the prosecution. Veolia supplied fraudulent and falsified documents. Veolia and the state once again tried — but failed — to get a court order barring Kirschbaum from the bus yards. It was an obvious effort to deny the membership their representation rights, since Kirschbaum hears and acts on many grievances by the workers.

Attorneys Wilson and Pavlos argued expertly for the dismissal of all the charges. The judge refused their request, however, and scheduled the trial on the two remaining charges for Nov. 24. The demonstrators then marched from the courtroom and held a fiery occupation, picket and rally in front of the court.

As the hated union-buster and general manager of Veolia, Alex Roman, and his assistant manager left the court, they got a taste of justified anger as the workers and their supporters booed Roman and chanted “Union!”

The workers vowed to continue the struggle until all the charges are dropped, the four illegally fired union leaders are reinstated, and a just contract is won.