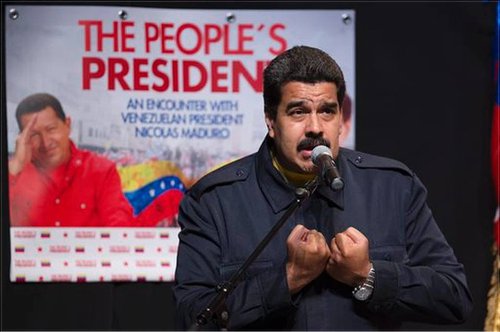 Bronx, N.Y. — When the history books in the U.S. are finally written by the working class, they will write about the special relationship between the people of the Bronx, N.Y., and the Venezuelan Bolivarian Revolution.

Since the advent of the revolutionary movement ushered in by President Hugh Chávez Frias, the community of the Bronx has been the center of a rich connection between the two.

And on Sept. 24 President Nicolás Maduro of Venezuela continued that rich tradition with a rousing address to a very welcoming crowd at Hostos Community College in the Bronx.

Over 1,000 overwhelmingly Latino/a students, community activists, union members and progressives gave an exciting welcome to the President. Unlike many other such events, President Maduro entered the well-known auditorium through the back, instead of in the front through the stage as most VIPs and speakers usually do, with a cheering reception from the surprised audience.

And true to his trademark, the “Peoples President” Maduro sat with the audience in the auditorium to listen to the first part of the program. The event opened with an amazing performance by the Up Beat NYC Youth Orchestra, which is a nonprofit, community-based group modeled on El Sistema youth orchestra in Venezuela. The audience gave the youth orchestra a wonderful standing ovation.

President Maduro began his remarks by offering Up Beat a trip to Venezuela, which also brought cheers from the crowd.

Other speakers on the program included Wanda Salaman, executive Director of Mothers on the Move in the Bronx, as well as Joe Kennedy II, who talked about the fact that over a million families have been provided heat in this country thanks to the aid provided by Citgo, a subsidiary of Venezuela’s oil company.

Rev. Danilo LaChapel gave the opening invocation and talked about the inspiration the revolutionary movement in Latin America is giving to the world. He also stressed the importance of solidarity with the Haitian people.

In the audience were former City Councilmember Charles Barron; Rukia Lumumba, the daughter of late Jackson, Miss., Mayor Chokwe Lumumba; Natasha Lycia Bannan, the president of the National Lawyers Guild; Puerto Rican and Cuban solidarity activists; and many revolutionaries from throughout the area.

It was indeed very important that the solidarity movement hear directly from the president of Venezuela.

U.S. imperialism has ratcheted up its war against the Bolivarian Revolution with constant defamation and slander. With the unfortunate and untimely death of President Chávez, Venezuela’s enemies expected the revolution to founder.

The bourgeois media have been constant in unfavorably comparing President Maduro to Chávez, with the word “uncharismatic” becoming almost synonymous with Maduro.

But President Maduro clearly blew that theory off the charts with his presentation Sept. 24, which received numerous standing ovations.

As President Maduro defended the gains of the Bolivarian Revolution and the progress of the countries in ALBA, the Bolivarian Alliance, he addressed the media’s defamation campaign. He pointed out that due to the demands of running the country, he had almost decided not to travel to attend the U.N. General Assembly events.

But the Sunday, Sept. 21 editorials in both the New York Times and the Washington Post were so scurrilous and vitriolic against him, he decided that he “had to come.”

President Maduro told the crowd that in the Washington Post editorial, he was referred to as an “economically illiterate former bus driver.”

When he said, “I am proud to have been a worker of the Caracas metro, to have been a day-laborer and now be president; I’ll let everyone at the Washington Post know,” the entire crowd immediately rose to its feet in thundering applause and cheers.

“How many [false] things are said daily of Venezuela among mass Western media?” he continued. “How many lies are fabricated in relation to the lives of the noble people of Venezuela, whose only sin was to aspire and dream of a new society, by constructing new socioeconomic and political models which surpass capitalism.

“To the Department of State, the Pentagon, the National Communication Association, to the White House, I ask you now to rectify the erratic political abuse of Venezuela and our revolution, because our revolution will not fall. On the contrary, it is rooted in popular, democratic constitutionality … and we have the reason and the right to continue it.”

Other highlights of President Maduro’s speech were when he called for Puerto Rico to join ALBA and for the U.S. government to free political prisoner Oscar Lopez Rivera. The crowd went wild then, especially the countless Puerto Ricans in the audience who had brought banners with Oscar’s face on them.

President Maduro also expressed solidarity with the Cuban Revolution and called for the freedom of the remaining Cuban Five prisoners.

In the audience was a delegation of Boston school bus drivers from Steelworkers Union Local 8751, who had traveled the long distance to welcome and greet President Maduro. Andre Francois, Steve Kirschbaum and Steve Gillis made the trip to express their solidarity not only with the Bolivarian Revolution but with a former bus driver.

Andre Francois was selected to sit in the VIP section and meet President Maduro when the Venezuelans in charge of the event were told that representatives of a bus drivers’ union would be present.

Francois told Workers World that he wished he had been able to say a few words to the event. Organizers who secured tickets for the bus drivers promised that next time they would definitely work to make that happen.