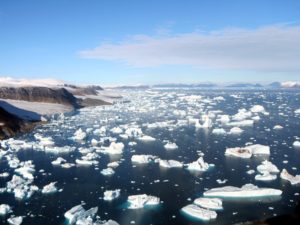 The Arctic is warming two to four times faster than the rest of the globe. This is due to a feedback loop involving the albedo (“whiteness”) effect, which is “a measure of how much of the sun’s energy is reflected back into space.” (skepticalscience.com)

Ice and snow reflect much more of the sun’s rays than open water and bare earth. As global warming slows down the formation of Arctic ice in the fall and hastens its breakup in the spring, more heat from the sun is transferred to the Arctic environment, which increases the changes in the ice and snow cover.

For the 250,000 or so Native peoples in the Arctic — mainly Inuit, living from Alaska to Greenland; but also Sami in northern Norway; Aleut, Athabaskans and Gwich’in in North America; Nenets, Chukchi and many other Indigenous peoples in northern Russia — the changes produced by this warming make the ways they catch the food that sustains them much more risky.

And the melting of permafrost makes the way they store what they catch more labor intensive and less secure.

Scientists generally consider the Arctic the area of the world where the ground is permanently frozen, but the speed at which the permafrost is thawing challenges this definition.

The example of Shishmaref, an Inupiaq village in northwest Alaska, illustrates some of the difficulties Native peoples in the Arctic face. Rising sea levels and the absence of shore ice mean the more violent storms that global warming produces are threatening to wash away this barrier island. The town’s homes, water system and infrastructure are being undermined.

The absence of sea ice makes it more difficult for hunters to harvest the caribou and seals that provide much of their protein. This town is 400 years old and could be destroyed in the next major storm. (arctic.noaa.gov)

Even though the resource exploitation that was opened up by this warming has brought some wage-paying jobs to the Arctic, hunting is still necessary. But as it becomes riskier and riskier and as young people become entranced with video games and school activities and are disinclined to follow their elders in hunting, social tensions — already high — have grown unbearable for many.

Suicides, alcoholism, glue sniffing and the breakdown of the community solidarity that enabled the Inuit to survive and prosper in the extremely harsh Arctic environment for a few thousand years are some of the social problems linked to global warming in the Arctic.