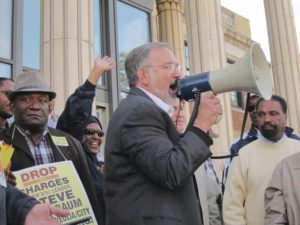 Andre Francois, left, and Steve Kirschbaum (with bullhorn) at Sept. 15 rally. Both were illegally fired by Veolia.
Photo: Howard Rotman

Kirschbaum has been falsely accused of four felony charges by the Boston police following a rally in late June demanding that Kirschbaum, along with other union leaders — Andre Francois, Garry Murchison and Steve Gillis — be reinstated. The four were fired last November following an illegal lockout of the workers Oct. 8 by the union-busting conglomerate Veolia.

This latest attack comes in the midst of contract negotiations between the local and Transdev, an Illinois-based company that currently oversees the four school bus yards. The drivers have made it clear that there will be no contract unless all four drivers are rehired.

Defense attorneys Barry P. Wilson and John Pavlos argued strongly at the pretrial hearing that the bogus charges against Kirschbaum should be dismissed because Veolia and the police are abusing the legal system to settle a labor dispute. Wilson stated that the police committed perjury when making the charges. Kirschbaum’s case is being sent to the National Labor Relations Board.