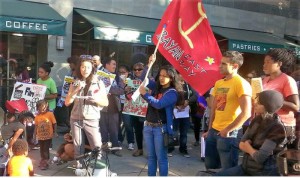 Oakland, Calif. — Close to 500 people blocked Broadway in front of the Marriott Convention Center in protest of an Urban Shield SWAT team training and weapons expo being held there. The negative publicity and pressure was so embarrassing for this urban hotel — especially in the aftermath of the Ferguson, Mo., rebellions — that the Marriott pledged not to contract with Urban Shield for future expos in Oakland.

According to protest organizers, “Urban Shield is the SWAT team training and weapons expo that brings together local, regional and global police-military units. … Urban Shield is connected to national police militarization programs such as 1033, 1122, Urban Areas Security Initiative and DHS Fusion Centers.”

The ad hoc coalition protesting the expo had four central demands: “[1] The city of Oakland must defund all activities related to Urban Shield, and all city agencies must withdraw their participation in it. [2] We demand an end to all city collaborations with the apartheid state of Israel. [3] We demand that the city of Oakland invest in community-based programs proven to decrease violence and harm instead of the increased militarization of its police force and emergency services. [4] We call on our communities to continue fighting back and resisting state violence and repression.”