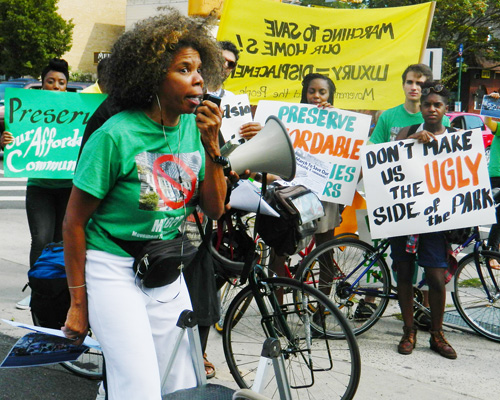 Brooklyn, N.Y., Aug. 24 — About 250 angry demonstrators gathered today for a march near the east side of Prospect Park in Brooklyn, N.Y. This is where developers plan to build luxury housing with up to 25 floors that will block the beautiful view of the park and crowd the neighborhood.

Protesters marched down Empire Boulevard, which is threatened by developers. Led by the Movement to Protect the People, the demonstrators carried colorful placards and banners. Their action was covered by Brooklyn’s Channel 12 for two days, and four protesters were interviewed.

While the group’s leader, Alicia Boyd, was leading the rally on Rogers Avenue, she called on the crowd to look at an empty chair in a vacant parking lot. She explained that all local politicians and officials were invited to join the rally, but the empty chair represented their absence. It showed they were apparently bought off by developers instead of joining the fight against gentrification.

Boyd shouted out, “Exercise the rights that our ancestors fought for!” Referring to the upcoming elections, she urged voters to see that “Everyone in office should be out! We’re the only ones to stop this! We have to stop the Jim Crow up North! You are not moving us!”

Boyd was recently arrested for trying to block construction of a 23-floor luxury building in her neighborhood. She was protesting the displacement of dozens of residents by the high-rise building, without any affordable housing for them to move into.

Rob Robinson, an organizer for Take Back the Land, criticized the political forces. He said, “Resistance has to be global. No social change comes without direct action or social disobedience.”

Protests have also occurred at the same site to counter developers’ use of non-union labor.

This area is one of the most densely populated neighborhoods in Crown Heights. Here, mostly people of color have moderate rent and home-ownership expenses that they fight to preserve. Now, 200,000 affordable rental and private homes will be displaced with an influx of expensive, luxury housing for wealthier residents. Maintaining affordable housing for workers and people of color is not in the interest of developers.

MTOPP works to gain zoning changes to stop gentrification. As unity with other tenant organizations grows, they are planning a town meeting. The themes will be “Luxury = Displacement!” and “We shall not be moved!” a major slogan of the historic Civil Rights Movement.