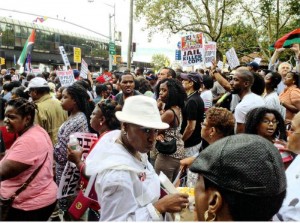 Staten Island, N.Y. — At least 15,000 people demonstrated in Staten Island, N.Y., on Aug. 23,  demanding justice for Eric Garner, an African American, slain on July 17 by New York City police officer Daniel Pantaleo.   A video of Pantaleo applying a chokehold to Garner, killing him, has been widely disseminated, and been seen by millions of people worldwide.

Even though the city’s medical examiner ruled Garner’s death a homicide, caused by the chokehold and chest compression, none of the cops responsible for his death have been charged.

The National Action Network and its leader, the Rev. Al Sharpton, initiated the Aug. 23 protest under the theme of “We will not go back.  March for Justice!”  It was held on the 25th anniversary of the lynching of 16-year-old African-American Yusef Hawkins, who was shot to death by racist youth in Bensonhurst, Brooklyn.

Demonstrators came from all over New York City and New Jersey. They boarded buses in the early morning from Harlem, Brooklyn, the Bronx, Queens and Westchester. The Arab American Association of New York in Bay Ridge filled a bus. Service Employees Local 1199, the hospital workers’ union, provided most of the buses. Hundreds of people took the Staten Island Ferry, chanting all the way.

Those who attended this spirited march expressed solidarity with the Black community of Ferguson, Mo., and the family of Michael Brown, an African-American youth who was gunned down in that city on Aug. 9 by police officer Darren Wilson.  Signs read, “We stand with Ferguson.”  A popular chant was “Hands up! Don’t Shoot!” which has been a prominent slogan in Ferguson.

Protesters gathered outside Tompkinsville Park in northeast Staten Island at the site where Garner was killed and then marched to the office of the Richmond County district attorney, Daniel Donovan, calling for justice all the way.

Chanting, “No Justice!  No Peace!” the demonstrators demanded that the cops responsible be charged and held accountable for Garner’s death — and put in prison.  They then marched to the 120th Precinct in St. George, where the rally was held.

Speakers at the rally included Esaw Garner, Eric Garner’s spouse, who spoke movingly, as did several of their children.  Gwen Carr, Eric Garner’s mother; Ellisha Flagg, his sister; and his nephew also spoke.

Family members of other Black youth who’d been killed by police also spoke.   Constance Malcolm told the demonstrators, “This is my family now,” pointing to them.

Malcolm’s 18-year-old son, Ramarley Graham, was shot to death by cop Richard Haste in Graham’s Bronx home in 2012. A judge dropped the case against Haste, citing prosecutorial errors, and then the grand jury refused to re-indict him.

Kadiatou Diallo, the mother of Amadou Diallo, spoke.  In 1999, racist police shot 41 times at her 22-year-old unarmed son, a Guinean immigrant.  Since then, police officers have killed more than 200 people, with Garner being the latest victim of racist police violence.

Rally speakers raised the police killing via chokehold of Anthony Baez in the Bronx 20 years ago.  Others at the podium told the crowd of other young Black and Latino/a victims of racist police brutality.

Former New York Gov. David Paterson reminded marchers that July 16 was the 50th anniversary of the killing of 15-year-old African-American James Powell by police Lt. Thomas Gilligan.  That heinous act sparked the 1964 rebellion in the New York neighborhoods of Harlem and Bedford-Stuyvesant, and then in other cities.

Paterson pointed to the 1973 killing by police officer Thomas Shea of 10-year-old Clifford Glover, a fourth-grader who weighed 90 pounds. After the fatal shots were fired, a cop was heard on a walkie-talkie saying “Die, you little bastard.” Shea was acquitted by a nearly all-white jury.

Paterson also told of the racist violence experienced by his father, the late Basil Paterson, a former New York secretary of state and New York City’s first Black deputy mayor.  He said, “In 1942 my father was pistol-whipped in front of all his neighbors for no reason.”

Energetically, the Rev. Herbert Daughtry of the House of the Lord Church in Brooklyn, and a longtime anti-racist leader, shouted to the crowd: “Forward ever! Backward never!”

The crowd cheered in response to a shoutout from the podium recognizing Ramsey Orta, who took the video of Garner’s killing.

Rep. José E. Serrano spoke to protesters in Spanish and English. “We are one,” he emphasized, referring to the historic Black and Latino/a community alliance that built Local 1199 and fought racism for decades.

Labor leaders addressed the crowd, including United Federation of Teachers President Michael Mulgrew.  George Gresham, president of  Local 1199, spoke on behalf of the union’s more than 100,000 members. Among them is Constance Malcolm.

The presence of Gresham, Mulgrew and other union leaders enraged police organizations, none of which deserve to be called “unions,” since the cops’ pre-eminent role in capitalist society is to act as armed defenders of the interests of the bosses and against the interests of workers and oppressed people.

During the march, many people complimented and photographed the six-foot-long sign carried by the People’s Power Assembly delegation that read: “Jobs with a living wage, not racist police murder!”

Thousands of International Action Center fliers which linked the police murders in Staten Island and Ferguson, Mo., to the genocidal war against the people of Gaza were distributed.