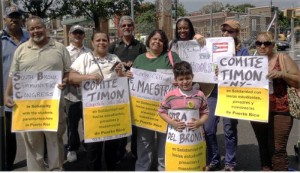 Bronx, N.Y. — A busy plaza in the Bronx was the site of a street meeting on Aug. 21, in solidarity with the growing fight for educational rights in Puerto Rico.  Parents and activists denounced the banker/governor’s austerity program that has closed 80 schools, where 45 percent were students with disabilities.

Milagros Cancel, leader of Comité Timón’s New York chapter, was joined at the noontime rally by other active parents and by founders of the South Bronx Community Congress, Parents to Improve School Transportation (PIST NYC) and  Centro Cultural El Maestro.  Several speakers raised connections between youth being deprived of a future from Ponce, Puerto Rico,, to Ferguson, Mo., to Gaza, Palestine.

The Peoples Power Assembly provided sound and placard supplies, enabling hundreds to see and hear the protest — including families lined up for school registration outside a regional New York City Department of Education office across the street.  Many took flyers. Some signed up to be invited to future actions.  Cancel told Workers World, “All who care about human rights can help put pressure on the governments of the United States and Puerto Rico to reverse this crisis.”  For more information, call 929-228-8217; to sign a message of solidarity, email [email protected]