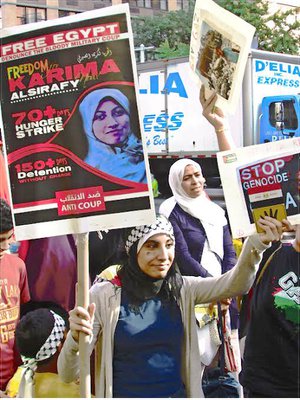 Thousands of Egyptian-Americans marched from the Egyptian Mission to the United Nations to Times Square on Aug. 14 to mark the first anniversary of the massacre at Rabaa al-Adawiya Square in Cairo. At least 2,600 supporters of ousted President Mohammad Morsi were killed by the U.S.-backed Egyptian military.

Morsi won the first democratic election in Egypt following the January 2011 rebellion at Tahrir Square, which toppled the 30-year rule of repressive U.S. ally Hosni Mubarak. Taking advantage of dissatisfaction with Morsi and his conservative Muslim Brotherhood movement, the Supreme Council of the Armed Forces, headed by Gen. Abdel Al-Sisi, staged a coup d’état. The military brass then began a reign of terror against all forces involved in the Egyptian revolution.

Speakers drew attention to Washington’s role in the coup. The U.S. provides $1.3 billion in military aid to Egypt annually in exchange for safeguarding Israel and protecting Big Oil profits in the Suez Canal. Protesters lashed out at Al-Sisi’s collaboration with Israeli genocide in Gaza by keeping the Rafah border crossing closed and helping to enforce the blockade.

The protest was sponsored by Egyptian Americans for Democracy and Human Rights and supported by the International Action Center.