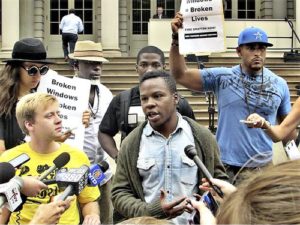 Subway artists and police brutality activists held a news conference at City Hall on Aug. 12 to protest the racist crackdown by the New York Police Department against performers in the mass transit system.

According to media reports in early July, arrests of subway performers have increased by 500 percent under Commissioner William Bratton, from 40 arrests in 2013 to 240 so far this year.

Matthew Christian of the performer advocacy group Busk NY explained that the NYPD ignores official MTA rules of conduct when they harass artists performing on subway platforms and mezzanines. He offered copies of the rules to journalists to see for themselves.

Andrew “Goofy” Saunders of the W.A.F.F.L.E. NY dance collective spoke out about how he was unjustly arrested and jailed. “We just want to dance,” he said. “The NYPD has repeatedly gone beyond the provisions of the MTA’s rules of conduct by charging train dancers — often young Black or Latino males — with misdemeanor reckless endangerment, even when no injuries have been demonstrated during decades of performances,” asserted Josmar Trujillo of New Yorkers Against Bratton.