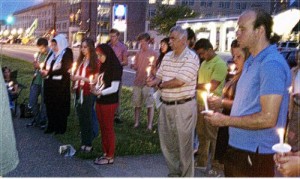 Around 50 people attended a candlelight vigil commemorating the victims of Israel’s aggression on Gaza organized by Appalachians for a Free Palestine on Aug. 7. Activists from the Muslim Association of Huntington; Students for Appalachian Socialism; the anti-imperialist youth group Fight Imperialism, Stand Together (FIST); and the Unitarian Universalist Association of Huntington attended the event. Songs were sung and stories written by Palestinians about their experiences during the Israeli attacks were read aloud.

Event organizer Jess Hurst told WW that seeing the aggression on Gaza and the denial of the Palestinians’ right to self-determination motivated her to call for the event. “I had been following the news coverage of the attack on Gaza, and I felt compelled to help the Palestinian people in any way that I could. I believe in Palestine’s right to clean drinking water, to electricity, to food, to safety, to self-determination in every facet of their existence. But believing is not enough; I must fight for it as well,” said Hurst.

WW spoke with Malak Khader, a Palestinian-American woman with the Muslim Association of Huntington who attended the event. Khader has family in the West Bank and told of their treatment under Israeli rule. “Any Palestinian in any area is subjected to Israeli ‘enforcement,’ which could mean a number of things. My family in Palestine tells us constantly that Israeli forces make rounds in their village frequently to make sure that there are no protests or whispers of protests. Any time a tank comes through the village, the children run and hide in fear because of what they have seen in Gaza and other parts of Palestine.”

Khader emphasized the need for people living in the U.S. to do all they can to stop the U.S. from aiding Israel: “The United States plays such a crucial role in Israel’s success and I don’t think people realize how much it affects Palestinians; it’s as if Palestinians are being kicked when they’re already down.”

— Report and photo by Benji Pyles 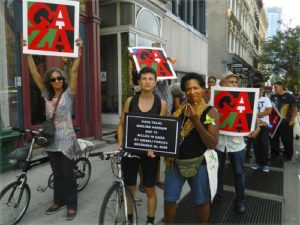 Several hundred activists marched for Palestine past Barclays Center — whose namesake bank profits from arms sales to Israel — on the afternoon of Aug. 11. Receiving a good response from many people they passed, they were soon joined by several hundred more supporters of Palestine for a rally honoring the victims of the Israeli attack on Gaza at the Church of St. Luke and St. Matthew. There, Puerto Rican, Palestinian, Jewish and Black community leaders all spoke out against Zionism.

— Report and photo by Anne Pruden

Organized by Students for Justice in Palestine, hundreds and hundreds of protesters marched from the Westwood Federal Building to the Israeli Consulate on Aug. 10, where they were joined by Los Angeles Jews for Peace. John Parker of the International Action Center gave a solidarity message.

— Report and photo by Maggie Vascassenno