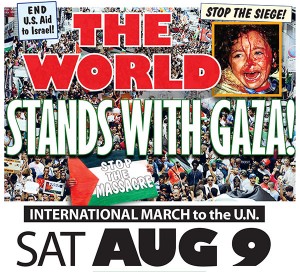 A coalition of organizations that support Palestinian rights have called for an “International March to the United Nations” meeting at 1 p.m. at New York’s Columbus Circle on Aug. 9 and then marching at 3 p.m. to the United Nations headquarters. They call the action “The World Stands with Gaza” and hope to reflect the massive worldwide support for the Palestinian people under murderous siege in the Gaza Strip.

Calling the action is The Break the Siege on Gaza Coalition, initiated by Al-Awda Palestine Right to Return Coalition, American Muslims for Palestine and the International Action Center. As of the afternoon of Aug. 1, another 48 organizations have endorsed.

The organizers say their goal is to reach deeper into U.S. society to find broad sectors of opposition to the Israeli slaughter of Palestinians in the current battle, as well as to explain the history of the struggle for Palestinian self-determination.

To strategize about how to accomplish this goal, the group has called a planning meeting for Tuesday, Aug. 5, at 7:30-9 p.m. at St. Peter’s Church, The Jazz Church, at CitiCorp Center, 54th Street and Lexington Avenue, which can be reached by the subway lines E, M, to Lexington Ave., N, Q, R, 4, 5 to 59th Street or 6 to 51st Street.