Protests on and around Al-Quds Day, the last Friday of Ramadan on July 25, took place in a number of U.S. cities. Some demonstrators linked the war on children in Gaza to the attacks on children from Central America who are crossing the U.S./Mexican border to seek refuge. Here are descriptions of some of the protests in support of the people of Gaza and against the U.S.-backed Israeli military machine. 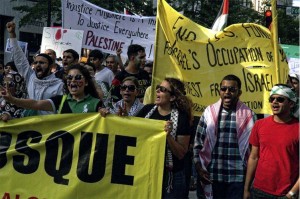 More than 750 people signed up for “Block the Boat for Gaza” actions scheduled Aug. 2 to stop the unloading of an Israeli ship at the Port of Oakland.

In San Diego hundreds of activists at a “Stop the Genocide in Gaza” rally marched through downtown July 25. They made a large banner on which were written the names, ages and cities of hundreds of Palestinians killed in Gaza. The action was called by the Palestinian Right to Return Coalition, which includes the American Islamic Foundation; International Action Center, San Diego; Collectivo Zapatista; Palestinian Youth Movement, San Diego; Unión del Barrio, San Diego; BDS San Diego; and many other organizations.

Several demonstrations in solidarity with the Palestinian people have been held in metropolitan Detroit, home to one of the largest Arab populations in the U.S. Several hundred marched in downtown Detroit on July 25. Around 600 Arab and Palestinian people rallied July 26 in nearby Dearborn, Mich., against the Israeli onslaught. Moratorium NOW! Coalition activists and Workers World Party organizers attended both protests.

In Atlanta, hundreds of Palestinians of all ages, along with people from many other Arab countries and Atlantans of all nationalities, marched on the CNN Center July 25 in support of the people of Gaza. The protesters were confronted by Zionist supporters of Israel, including several armed with assault rifles and handguns. Organizers of previous Gaza protests had received scores of threatening messages from men associated with this pro-war display. While police set up barricades to contain the pro-Palestinian protesters, no action was taken against the gun-toting proponents of Israel. After an hour of defiant chanting, the Palestine supporters broke out of the confined sidewalk area and took to the streets, where they remained for hours.

Thousands of demonstrators in Philadelphia have been in the streets to demand an end to Israel’s siege of Gaza. Hundreds of Palestinians and their supporters gathered July 23 in a two-hour showdown opposing a Zionist rally. Around 1,000 pro-Palestine demonstrators rallied outside the Israeli Consulate July 25 and marched through Center City. These protests were organized through word of mouth in the mosques and by social media networks of the International Action Center, Temple University Students for Justice in Palestine and other solidarity groups.

About 100 people gathered July 27 at the Irish Memorial — a monument to Irish resistance to  the British-imposed famine of the 1840s — to show Irish-American support for Palestine.

In Syracuse, N.Y., more than 200 people, including Muslim and Jewish demonstrators, gathered in front of the Federal Building July 25. In Rochester, N.Y., over 200 Palestinians and supporters came out for a rally July 25, which was described as one of the biggest anti-war protests in that city since the height of the Iraq war. This was the third week of protests.

In a quickly organized emergency response to counter a July 23 “Stand with Israel” rally in Hoboken, N.J., people came from cities in northern New Jersey to show support for the Palestinian people. The demonstration, which outnumbered the pro-Israel rally, included Arab, Black and Latino/a people, plus members of Jewish Voice for Peace and a member of the synagogue where the Zionist rally was being held.

In Jersey City, N.J., members of the Jersey City Peace Movement and Jews United Against Zionism held a protest, including a symbolic die-in, July 27 at Journal Square Plaza.

Several large demonstrations have taken place in New York City since the beginning of the U.S./Israeli war on Gaza.