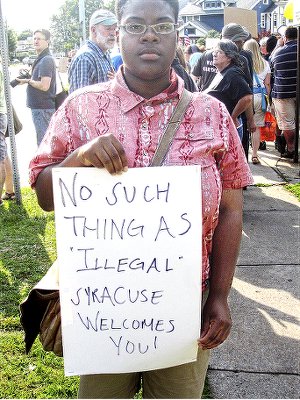 Chanting “The people united will never be defeated! El pueblo unido jamás será vencido!” a crowd of more than 100 people in Syracuse, N.Y., rallied July 18 to support migrant children. Their voices drowned out intermittent anti-immigrant shouts from about fifty right-wingers across the street.

The pro-immigrant crowd held their ground at two corners of an intersection in front of buildings belonging to the Sisters of St. Francis, a Catholic order. The site is being considered by the U.S. Department of Housing and Human Services as a detention center for migrant children.

Participants welcomed the children with many messages of love and support. They also held up slogans linked to Syracuse’s history of anti-racist struggle, including “Refuge not racism,” “Remember Harriet Tubman,” “Syracuse is a sanctuary city,” “Ningún nino es ilegal” and “Syracuse helps freedom-seekers.”

Some signs linked the pro-migrant struggle to the battle in Syracuse against the Fugitive Slave Act of 1850. In 1851, for example, thousands of anti-slavery abolitionists stormed a jail in Clinton Square in Syracuse, to help William Henry free himself from the custody of federal marshals who planned to return him to enslavement.

Anti-immigrant demonstrators held signs that voiced a virulent, dehumanizing racism. Their local spokespeople are publicly identified with Overpasses for America, the Tea Party and the 9/12 Project, a group created by neofascist commentator Glenn Beck.

In a blatantly ironic juxtaposition, the right-wing protesters stood in front of a local street sign that read: “Welcome to Court-Woodlawn Neighborhood. Home to Generations of Many Nations.”

Syracuse was specifically targeted in the July 18-19 national demonstrations called against both the migrant children and immigration amnesty by Americans for Legal Immigration, a well-known anti-immigrant group.

Local immigrant-rights organizer Aly Wane said he was “proud of Syracuse for showing up” at short notice and in numbers to defend the children and the struggle for immigrant rights.

He also noted he was conflicted that the children were to be detained while both Democratic and Republican parties try to fast track the children’s deportation rather than work to connect them to family and friends in the U.S.

Wane is a publicly declared undocumented person, originally from Senegal, and a member of the Syracuse Peace Council. The SPC was the sponsor of the supportive rally. 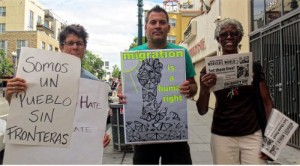 Activists and community members gathered outside the Mexican Consulate in downtown San Diego on July 18 to tell racist anti-immigrant protesters they’ve got it all wrong.

The same racists that in Murrieta, Calif., turned around buses that were carrying Central American refugees showed their ugly sentiment at the consulate.

But pro-immigrant activists were there in force distributing Workers World newspapers and raising awareness about the role of U.S. imperialism in driving minors to cross U.S. borders.

The so-called North American Free Trade Agreement, the CIA’s destabilization efforts and the U.S. “war on drugs” are just a few of the reasons for the recent influx outlined by protesters as many curious passersby as well as families accessed the consulate.

City workers and restaurant goers alike thanked the activists for standing up to the hate speech and misinformation being promulgated. The youngest pro-immigration activist, nine-year-old Ananda, held a sign that read, “Estamos contigo niños.”

Ananda’s grandma, Gloria Verdieu, emphasized to WW the absence of Nicaraguan children coming to the U.S. southern borders, seeing as Nicaragua has managed to free itself from U.S. economic exploitation. 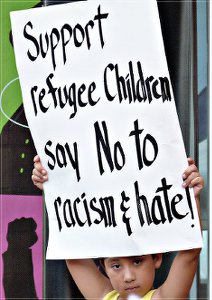 Pro-immigrant demonstrators outnumbered anti-immigrant protesters 10-to-1 at opposing rallies outside the Mexican Consulate in Philadelphia on July 18. When immigrant solidarity activists learned that racists planned to be in Philadelphia for a “national day against immigrant community members,” a call went out to oppose this hate and bigotry. Organized by the New Sanctuary Movement and Juntos, over 100 people filled the area in front of the consulate, effectively isolating and marginalizing the dozen Tea Party members. 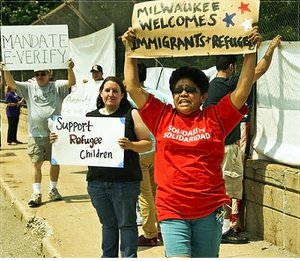 On July 18 and 19, anti-immigrant activists held demonstrations across the country, including in Wisconsin, against immigrant child refugees fleeing extreme violence in Central America because of policies created, supported and funded mainly by banks and corporations in the U.S. and the government that protects them.

At a highway overpass in Milwaukee over a busy interstate expressway, pro-immigrant and pro-children forces confronted and drowned out the racists and hoisted progressive signs and banners demanding refugee status for the children from Central America, especially Honduras, where U.S. imperialist meddling is responsible for the 2009 right-wing coup.