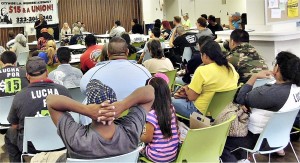 A Workers’ Assembly on July 19 in Los Angeles drew more than 100 excited people, mostly low-wage workers and their supporters, who were eager to sign up and become part of a campaign to put an initiative on the ballot for a $15 minimum wage that would take effect immediately.

John Parker, a board member of the South Central Neighborhood Council convened the assembly. He pointed out that one out of every four persons in Los Angeles lives in poverty and that low-wage workers and the community need this measure now.

Assembly co-chair Daniella Long­champs is a young low-wage worker herself. She opened up with an account of how low-wage workers, and tipped workers in particular, are treated by their bosses: “We work long hours, sometimes we don’t even make the minimum wage, and are abused. My co-worker told me how the boss took her into the bathroom and raped her.”

Luis Garcia Nazarit, a student at Los Angeles Trade Technical College and president of that campus’s chapter of MEChA (Movimiento Estudiantil Chicano de Aztlán), a participating group, offered to translate for the assembly. Meeting participants could sign up to testify and ask questions.

Larry Holmes, a national coordinator for the Peoples’ Power Assembly, pointed out that the campaign being launched is not only significant in and of itself: “Its ability to assist the low-wage workers’ movement, and particularly their demands for a union, are equally important.” He described how this fight has national significance, taking place in the second-largest city in the U.S., with the largest number of low-wage workers.

Jose Vandenburg from $15 NOW, a group that originated in Seattle, testified, debunking some of the myths around raising the minimum wage.

This ballot initiative was not the only workers’ issue discussed.

Teresa Gutierrez, representing the May 1st Coalition for Worker and Immigrant Rights, proposed a national caravan in support of the migrant children who are facing fascist mobs. Colleen Davidson, from the FIST — Fight Imperialism, Stand Together — youth group, connected the issues of support for Gaza and Palestine with the refugee migrant children and low-wage workers. She proclaimed her group’s support for the Workers’ Assembly.

Other participants talked about the importance of the assembly itself as a vehicle for workers’ rights. Participating groups included Fight for $15; the South Central Neighborhood Council; OUR Walmart; BAYAN; the United Electrical Workers and Los Angeles Trade Technical College students.

Members of the Peace and Freedom Party and the Green Party stayed for the more informal question-and-answer period to lend their electoral expertise to the assembly. Other participating groups included the Southern California Immigration Coalition, Interfaith Communities United for Justice and Peace, and School of the Americas Watch.

Sharon Black, a volunteer with the Los Angeles Workers’ Assembly, announced a follow-up organizing meeting on Saturday, Aug. 9, at 3 p.m. at the Harriet Tubman Social Justice Center, 5278 West Pico Blvd. in Los Angeles. She also proposed a “Walk for Justice for $15 and a Union” in September from East to West Los Angeles, with a goal to involve students and youth across Los Angeles in this important fight.