July 14 — As the Israeli bombing assault murdered what is now approaching 200 people in Gaza, about three-quarters of them civilians according to United Nations estimates, and with the Israeli army poised for a land invasion, people in solidarity with Palestine and against the Israeli war held demonstrations across the United States from Boston to Seattle to San Diego, some of which we report on here.

For three hours, a strong delegation of Palestinians of all ages residing in Philadelphia, along with many supporters enraged by the criminal attack of USA/Israel against Gaza, gathered July 11 in front of the Israeli Consulate for the largest demonstration for Palestine in this city this year.

Called initially by the Students for Justice in Palestine in response to a “Day of Rage” call from Palestine, the protest quickly gathered support among many individuals and organizations, including local Muslim groups and the Philly International Action Center, building through word-of-mouth and social media.

Children with handmade signs, and young Palestinian women and men proudly wearing kaffiyehs and waving big Palestinian flags loudly shouted slogans with such energy echoing and building a link with the struggle fought in Gaza by their sisters and brothers.

From the corner fronting the criminal and racist state’s consulate, the demonstrators poured onto the other three corners, chanting while holding placards and flags as they crossed the intersection at every traffic light change. Drivers waved or blew horns in support, and the protesters shouted even louder in clear appreciation. One slogan said it all: “We are all Gaza! We are all Palestinians!”

In New York City, more than 5,000 people — many of them of Palestinian origin, with contingents of Egyptian and Syrian supporters, orthodox, anti-Zionist Jews and some U.S. anti-imperialists — gathered on three days notice at the Israeli Consulate on the afternoon of July 9 to protest Israel’s attacks on Gaza and on the West Bank.  Their rally at Second Avenue and 42nd Street was followed by a march to Sixth Avenue and 48th Street, the location of the World News building, headquarters for Rupert Murdoch’s reactionary media empire, where they held another rally to protest the biased anti-Palestinian coverage in the media. They chanted, “From the river to the sea, Palestine will be free!” “Long live Gaza!” and “Intifada! Intifada.” 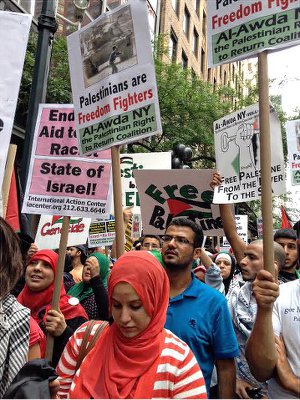 Lamis Deek, one of the rally’s organizers, told the media: “We are standing here to demand an end to the hate, incitements and attacks of the settlers that have been happening not just in the past two weeks but that we’ve been enduring since the Israeli occupation.”

In a militant protest in San Francisco on July 12, called by the AYO-Arab Youth Organization of the Arab Resource & Organizing Center, over 1,500 people rallied and marched to “Say no to Zionism!” “Stop U.S. Aid to the Apartheid State of Israel!” “Free all our political prisoners!” and “Support the Palestinian people’s struggle for liberation!” Starting at Justin Herman Plaza with a rally, the protesters, led by a contingent of Palestinian flags, marched up Market Street to the United Nations Plaza, blocking all the lanes of traffic in the direction of the march. Stopping frequently, the marchers chanted, “From the river to the sea, Palestine will be free!” As they passed the shopping district, chants of “While you’re shopping, bombs are dropping!” rang out.

On July 11, several hundred people gathered near the federal building in the center of downtown San Diego to protest Israeli aggression against Palestinian Gaza. The demonstrators, answering the call to protest by Al-Awda, the Palestine Right to Return Coalition, took over the four corners and traffic islands of a busy intersection. The targets of their anger were not just the Zionist terror weapons raining down on Gaza but also U.S. political and financial support for that murderous terror. Passing motorists showed overwhelming support for the protest.

About 75 people in Tucson, Ariz., held an emergency demonstration on a hot July 11 afternoon against the U.S./Israeli attack. The multinational and multi generational protesters held many Palestinian flags. Honks and waves of approval came from the passing traffic. Some of the youths held signs that read, “I’m Jewish and I support Palestine” or some variation of that assertion, something new for a pro-Palestine demonstration here.

Roughly 400 supporters of a free Palestine rallied on both sides of Wisconsin Avenue in front of the Reuss Federal Building on July 11 in Milwaukee. They chanted, “End the Occupation Now!” “Free Palestine” and “From the river to the sea, Palestine will be free!”

Besides condemning the Israeli bombing of Gaza and the killing of civilians, speakers also attacked the FBI harassment of Palestinian Americans here and called for support for Rasmea Odeh. The action, which was sponsored by the Milwaukee Palestine Solidarity Coalition and endorsed by various pro-Palestinian organizations, marched to Sen. Ron Johnson’s office in the old federal building, east of the river, forcing police to stop cars as the marchers took over Wisconsin Avenue.

Hundreds of Palestinian youth and Palestine supporters lined the street in front of the Israeli Consulate in West Los Angeles on July 8. The enthusiastic crowd raised powerful chants against the U.S.-backed Israeli terror against Gaza, silencing the couple of dozen Zionists across Wilshire Boulevard. Al-Awda, the Palestinian American Women’s Association, Students for Justice in Palestine-U.C. Riverside, the Answer Coalition, Jewish Voice for Peace and the International Action Center supported the action.

As the Israeli military continued its assault on the Palestinians of Gaza, people marched through the streets of Chicago again, July 12, for the third time in a week. Around 1,500 people chanted, “End the siege of Gaza, now!” and “From the river to the sea, Palestine will be free!”

In Racine, Wis., people rallied July 12, demanding an end to attacks on Palestinians in Gaza. The Racine Peace and Justice Coalition sponsored the event.

About 250 supporters of Palestine rallied in St. Paul, Minn., on July 11 to protest Israel’s brutal assault on Gaza. Sabry Wazwaz, of the Minnesota Anti-War Committee, urged rally participants to step up efforts to support Palestine. The protest was called by the Minnesota Coalition for Palestinian Rights and the Women Against Military Madness Middle East Committee. Another demonstration will take place July 14 on May Day Plaza.

Sixty people gathered outside the office of U.S. Sen. Bill Nelson at the Sam Gibbons Federal Courthouse in Tampa, Fla., on July 11. They were there to demand Sen. Nelson actively support bringing home Tariq Khdeir, the 15-year-old Tampa resident brutally beaten and arrested by Israeli police while in Jerusalem. “Tariq has still not been charged with a crime,” said Sara Ghohestani-Bojd of Tampa Dream Defenders. “We must take action to condemn the crimes happening in Palestine and to demand justice.”

More than 1,000 people marched in Detroit on July 13 to “protest against Israel’s collective punishment of Gaza and its violence against Palestinian youth.” The demonstration, predominantly youthful, was organized on Facebook and other social media and was led by young Palestinian and Arab women. The action was underway before the official start time, as hundreds gathered across from the Max M. Fisher Music Center, where the Concert of Colors, part of the 22nd annual Diversity Festival, was taking place. They were joined by hundreds more before the swelling crowd began marching up Woodward Avenue for a rally at a park across from Wayne State University.

“Occupation is a crime from Detroit to Palestine!” and “From Gaza to Detroit, water is a human right!” were two of the many chants. Connections were also made with protest placards and by rally speakers between the struggle in Detroit against emergency-dictator-imposed austerity and water shutoffs and the struggle of the Palestinians in Gaza. U.S. financial and military “aid” to Israel was denounced as were the ongoing genocidal bombings. Workers World Party, the Michigan Emergency Committee Against War & Injustice and Moratorium NOW! Coalition activists participated.

More demonstrations are set for this week, including in Buffalo, N.Y.