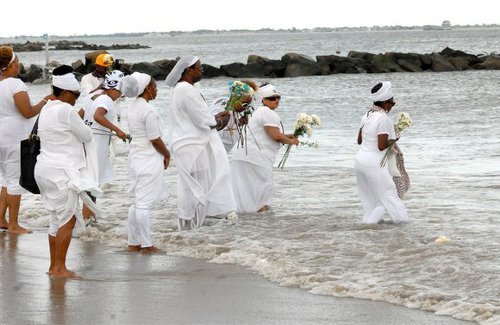 Brooklyn, N.Y. — On June 14 from noon to sunset, the 25th annual “Tribute to Our Ancestors of the Middle Passage” took place at the “Ancestors’ Circle” on Brooklyn’s Coney Island boardwalk. The takeaway message from the organizers was: “We will never forget you and we will never turn our backs to you.”

The tribute paid homage to the tens of millions of Africans kidnapped from their homeland who perished at sea in the bowels of slave ships from Africa to their destinations in the Caribbean, Central and South America, and the United States. Some of the earliest slave ships docked in the waters off Coney Island. In the spirit of Sankofa [from Ghana’s Akan language meaning “reach back and get it”], the commemoration focused on educating all people about the past so that it will never be forgotten or repeated.

The day’s celebration began with African drumming, the pouring of libations, and prayer, followed by the history of African peoples, African dancing, musical performances and spoken word poetry. Names were read honoring those throughout the African Diaspora who made significant contributions to the Black Liberation struggle and who recently died. The celebration was open to everyone and wearing white or African attire was encouraged to show unity.

The day concluded with a procession from the boardwalk down to the beach, accompanied by drumming and the playing of other African instruments, a wade in the water, and the offering of flowers and collective prayers to the ancestors. The traditional return to the boardwalk is to walk backwards, symbolizing never turning one’s back to the ancestors.

The City University of New York’s Medgar Evers College and People of the Sun Middle Passage Collective sponsored and organized the tribute. The collective makes a political and social commitment to raising all people’s consciousness and activism. A vital part of the collective’s work includes a focus on the Brooklyn community around issues affecting personal lives, such as health issues, personal safety and the environment.