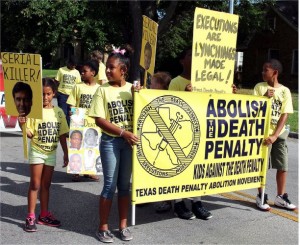 From the very serious to the celebratory, Juneteenth activities are taking place all over Texas. There are barbecues, rodeos, oratory contests, parades, public concerts and forums. Juneteenth celebrates news of freedom from slavery in Texas on June 19, 1865, two years after the Emancipation Proclamation was signed.

In Houston, the Texas Death Penalty Abolition Movement and Kids Against the Death Penalty joined a citywide parade to Emancipation Park where a festival with food, music and speakers was held on on June 14.

This year is the 142nd celebration of Juneteenth in Emancipation Park.

The land for Emancipation Park was purchased in 1878 by Rev. Jack Yates and his congregation at Houston’s oldest Black church, Antioch Missionary Baptist Church, so Houstonians could celebrate Juneteenth. At that time almost all Houston parks were segregated and off-limits to African Americans. This park was later donated to the city of Houston in 1916, but still remains an integral spot for African-American activities.