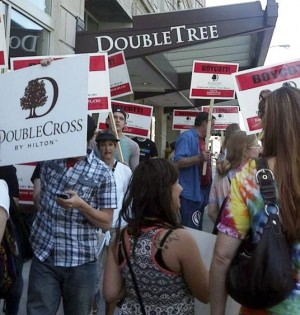 On June 11, just five days after it was targeted by hundreds of protesters and thousands of petitions, Doubletree Hotel in Detroit confirmed it had canceled reservations for a conference organized by a group called “A Voice for Men,” which was scheduled to hold its first national conference there June 26-28. The group then announced it would convene at a Veterans of Foreign Wars hall in the suburb of St. Clair Shores, Mich., some 18 miles from downtown Detroit. Anti-sexism, pro-woman activists declared the cancellation an important victory.

This MRA (“men’s rights advocates”) group, based in Houston, promotes violence against women and is pro-rape, according to its website. It is part of a reactionary movement that claims men are somehow discriminated against and oppressed in modern society. They deny the existence of male supremacy, rampant sexism and widespread violence against women. The Southern Poverty Law Center, which tracks hate crimes against oppressed people, has designated MRAs as hate groups.

The June 7 protest included progressive women and men of varying ages, nationalities, abilities, genders and sexual orientations. It included UNITE HERE union organizers promoting a boycott of Doubletree (part of the Hilton empire) and other hotel chains because of low wages and poor working conditions. The participants took over the street in front of the Doubletree for an hour, demanding a hotel representative accept over 3,000 signatures on a petition to cancel the violence-promoting MRA conference. More than 3,500 signatures in total were directed at Doubletree.

MRA supporters have inundated the media and Internet with lies about alleged threats of violence directed at their conference. In reality, it is they who advocate violence against women. Progressive activists warned women in the Detroit area, and those working at the Doubletree Hotel, that they face very real threats from these men. Emma Howland-Bolton, a leading organizer of the June 7 march and rallies, told Workers World, “[W]e recognized the necessity of protesting the decision of a private corporation to prioritize profit over the safety of its workers.”

MRAs menacingly followed women activists and videotaped the June 7 protest. This reporter received an email claiming to be from Marc Angelucci, a Los Angeles attorney and leader of the National Coalition for Men, who said he is a “socialist-leaning [sic] person who has done lots of human rights work” and that the feminist protesters were a “reactionary group.” The defensive email, which at least one other activist received, confirms the right-wing nature of MRAs.