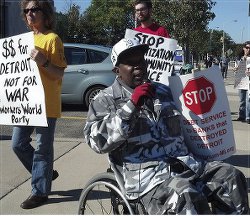 Detroit — Jerome Jackson, 58, an activist in the fight for social justice, died on May 11 after battling cancer. He also struggled with high blood pressure directly caused by the five-year fight to save his home from an unjust foreclosure and a threatened eviction.

Jackson was shot in the back at age 14 after standing up to a bully at school and was left paralyzed from the waist down. He used a wheelchair for mobility and led an active life with dignity and independence. He played basketball and coached youth basketball teams in the public schools. He gave motivational talks against bullying to youth. He had a son, Michael, whom he was very proud of, despite earlier being told he could never have children.

Activists met Jackson, along with his sister and brother-in-law, Jettowynne Jones and Darryl Jones, when he came to Detroit Eviction Defense seeking help in the fight to stop the foreclosure of his home.  In 2004, during the heyday of predatory lending, Jackson participated in a program initiated by the federal corporation Fannie Mae, in collaboration with banks, local governments and nonprofit agencies, to provide mortgages to people with disabilities.

Jackson received a mortgage from PNC Bank for a wheelchair-accessible home, specially built for him, in Inkster, Mich., a suburb of Detroit. The mortgage, backed by Fannie Mae, was made with the promise of a subsidy covering most of the monthly payments by Community Living Services, an agency under contract with the Wayne County government. In 2009, the subsidy was abruptly stopped by Wayne County and CLS, and the foreclosure process began. Jackson had fought back ever since.

Jackson became an inspiring leader in the movements fighting foreclosures and evictions, and for the rights of people with disabilities, joining Detroit Eviction Defense, the Moratorium NOW! Coalition and Warriors on Wheels. He founded and chaired the WOW committee on housing issues for people with disabilities. He demonstrated his solidarity by participating in pickets and home defenses for many others facing foreclosure and eviction. And with his big smile, Jackson encouraged others to do so as well.

Jackson stood against racism and bullying. In September 2012, he drove to suburban Wyandotte, Mich., to show solidarity with Black and white girls in junior high school who were being subjected to racist harassment for being friends. He spoke movingly against bullying and racism, and urged the girls to stand together. He returned to Wyandotte a few months later to support parents protesting this racist bullying at the local school board meeting.

Last November, Jackson joined a WOW-organized wheelchair blockade of the Outer Drive bridge over the Southfield Freeway in Detroit, demanding sidewalk curb cuts for accessibility. The state of Michigan agreed to install curb cuts this year.

Jackson illustrated to all of us how to live a rich and fulfilling life in the face of incredible obstacles, even as he fought for justice. He will be deeply missed.