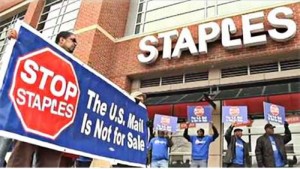 American Postal Workers Union members and Stanford University students picketed outside a meeting of the board of directors of Staples in Palo Alto, Calif., on June 2. The reason: the U.S. Postal Service has subcontracted with Staples to sell postal products at its retail stores.

Recognizing this deal as a major step toward privatization, the APWU has called for a boycott of the office supply chain. In May, American Federation of Teachers chapters in California, New Hampshire and Michigan adopted resolutions to boycott Staples stores for teachers’ back-to-school shopping. The AFL-CIO nationally and statewide in New York and New Hampshire have added Staples to their boycott lists.

One of the attendees at the Staples board meeting was Robert Sulentic of the CB Richard Ellis Group, a firm hired by the postal service in a no-bid sweetheart contract to sell billions of dollars of postal property. The Staples/USPS deal will cause the closing of more postal facilities, benefiting Sulentic’s firm.

Shire Goodman, executive vice president and head of Staples North American Contract Division, criticized the APWU boycott on May 21. Referring to postal workers, she said, “How nice it is to have a job for life” and “Those days are over, this country can’t afford to do business as usual and neither can we.” A disgruntled Staples worker leaked her remarks in a letter to APWU officials.

Each Staples board member is given $250,000 per year. Goodman is also on the boards of Carmax and Stride Rite. She believes workers should not be paid a living wage but is presumably fine with the vast inequality her capitalist system has created and from which she and her class profit.

Most low-wage workers are women, immigrants, African Americans, Latinos/­as, Asians and Native Americans, far out of proportion to their actual numbers in the population. The postal service — which Staples is undermining — provides hundreds of thousands of living-wage jobs for women, veterans and people of color in the U.S.

At Staples, by contrast, the average sales associate makes $8.53 an hour. Staples had to pay a fine of $42 million in 2010 for overtime not paid to its workers. It’s also been accused of limiting workers to less than 32 hours per week to keep them from qualifying for the Affordable Care Act. If proven, this would be illegal. (Alternet, Jan. 13)

Staples workers and postal workers both have legitimate grievances. A look at the list of Staples executives and board of directors reveals close ties to other low-wage industries. (nndb.com)

For example, Leo Kahn, who co-founded Staples in 1985 and helped start the age of “big box” retail stores, also founded Fresh Fields and Nature’s Heartland, which Whole Foods bought in 1999. Tom Stemberg, the co-founder and still CEO of Staples, is also on the board of Carmax and Petsmart. Ron Sargent, also one of Staples CEOs, is on the board of Mattel, Kroger, Yankee Candle and Aramark.

Staples board members profit from low-wage industries, including restaurants, grocery chains, food production and so on. Their connections help expose how all workers share a common assortment of corporate exploiters. But this can help increase solidarity between workers at seemingly unrelated corporations.

It may be possible for boycott organizers to put pressure on individual Staples board members to oppose the privatization deal with the USPS.

Furthermore, the Staples boycott can become a part of the rapidly growing movement to raise wages for millions of workers earning low incomes.

It can be pointed out to low-wage Aramark workers — who cook and sell food at many of the sports stadiums, school cafeterias and prisons in the U.S. — that Ron Sargent, one of the bosses who exploits them, also exploits the low-paid workforce at Staples. Even more, Sargent and other Staples bosses are involved in the privatization of the postal service, transferring decent-paying jobs to non-living-wage jobs at Staples.

The same goes for workers exploited by Staples board member Robert C. Nakasone, CEO of Toys“R”Us and member of the board of Shaw’s Supermarkets. The latter is part of Cerberus Capital Management L.P., as are Albertson’s, Acme, Jewel-Osco and Star Market grocery chains. How many workers at Nakasone’s stores make a living wage? Does Nakasone want to lower postal workers’ wages by replacing them with workers at Staples?

It might be worthwhile to question Drew Gilpin Faust — president of Harvard University and on the Staples board of directors — about Staples’ policies on postal privatization and on the low wages, hours and benefits of workers at Staples, at the same time questioning her on Harvard’s treatment of its campus workers.

These corporations do business in most of the communities where we live and work. This type of information can help link the issues of wages at Staples, the postal service and fast food industries. These struggles are intrinsically united because these enterprises are all owned and controlled by a tiny group of people — the 1%.

The unity of these struggles can increase the number of workers backing the Staples boycott as well as strengthen the movement of workers fighting for a higher minimum wage.