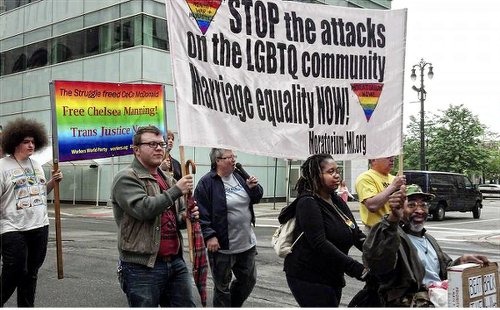 “Motor City Pride,” a June 7-8 festival with a march the second day, drew tens of thousands from all over southeast Michigan to downtown Detroit this year. Even more than in previous years, the struggle for marriage equality took center stage. Same-sex couples won a huge victory in March when Federal Judge Bernard Friedman ruled in favor of the right to marry and, by extension, to adopt children jointly. Pride participants were eager to have their picture taken with plaintiffs Jayne Rowse and April DeBoer and their three adopted children. The case is now in the federal Sixth Circuit Court of Appeals.

The Michigan Emergency Committee Against War & Injustice and Workers World Party carried banners for marriage equality and for the freedom of imprisoned transgender GI Chelsea Manning. They stopped to join a UNITE HERE protest outside the anti-worker and anti-union Crowne Plaza Hotel. UNITE HERE had a strong presence in the march and festival. The union’s “sleep with the right people” campaign appeals to the LGBTQ community not to hold events in anti-worker hotels that present themselves as “friendly” to lesbian, gay, bisexual, transgender and queer people.

WWP members discussed the benefits of socialism vs. capitalism with a steady stream of festival participants, most of them LGBTQ youth.