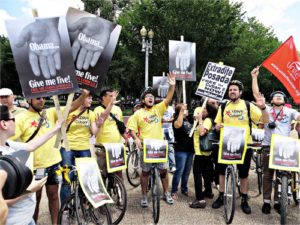 Washington, D.C.,June 9 — For the third consecutive year, a week of activities about Cuba is being held in the U.S. capital. The activities focus on the case of the Cuban Five, unjustly imprisoned by U.S. imperialism, and on U.S.-Cuba relations. The organizing group is the International Committee for the Freedom of the Cuban Five.

Though it is still ongoing, one can report that this conference was the best attended ever, and had the most ambitious agenda. Representatives and/or delegations from 31 countries attended the meeting, demonstrating Cuba’s worldwide importance.

Cuba is a relatively small island in the Caribbean Sea, buffeted by hurricanes and the criminal U.S. blockade. It is poor in economic resources but a giant in generosity and internationalism.

International delegates joined U.S. activists to demand the U.S. government end the blockade of Cuba and immediately release Gerardo Hernández, Antonio Guerrero and Ramón Labañino. Two of the Cuban Five, Rene González and Fernando González, served their sentences and are back in their homeland.

A press conference on June 4 at the National Press Club was convened and chaired by  NPC’s Chairperson Myron Belkind. The room was filled with local and international media. For the first time, the Washington Post published a very favorable article, entitled “Rapping and rallying for the ‘Cuban Five.’”

The conference theme was “The Cuban Five and the future of U.S.-Cuba relations.” Stephen Kimber, author of “What Lies Across the Water: The Real Story of the Cuban Five,” and lead attorney Marcus Garbus reported on the current status of the case.

Both delved into the history of U.S. aggression against Cuba, including U.S. government payoffs to reporters in Miami to influence the jury against the Five. Never before, Garbus said, had the U.S. government paid so much to silence a case. He explained how the Cuban right-wing residing in Miami covered the entire region with anti-Cuban propaganda, making it impossible to learn the truth and arousing intense prejudice against the Five.

What is important now, said Garbus, is getting the convictions invalidated and exposing the agencies involved in the cover-up. So far the only verified fact is that millions of dollars have been paid to the counterrevolutionary Radio Martí.

Cuban Ambassador to the U.S. José Ramón Cabañas and actor Danny Glover spoke in the opening plenary. Glover shared moving experiences, thanking Cuba for its valuable role in Africa and the Cuban people for their courage and strength.

The two-day conference had many panels covering various aspects of relations between the two countries: Prospects for U.S.-Cuba relations and USAID secret programs against Cuba, History of terrorism against Cuba: The case of the Cuban 5, Cultural exchange during the Obama administration, Legal update on the case of the Cuban 5: What else can be done?, The Cuban 5, Oscar López Rivera and other political prisoners, and Books dispelling misinformation against Cuba. These panels will soon be available in online video.

Puerto Rican hero Rafael Cancel Miranda traveled from the island to participate in this day of international solidarity. Cancel Miranda spoke about Puerto Rican political prisoner Oscar López, who has been imprisoned 33 years. He highlighted the crimes committed by the U.S. empire against Puerto Rico, which is still a Yankee colony, but whose people, despite continued repression, have not stopped fighting for freedom.

Mariela Castro, daughter of Raul Castro and Vilma Espín and director of the National Center for Sex Education of Cuba, addressed the audience by video. Other videos dealt with the commission investigating the case of the Five held in London in March, plus an unreleased documentary made by the late Saul Landau, “The Sexual Revolution in Cuba.”

At night, a concert by Dead Prez brought the case of Cuba and the Cuban Five to new layers of youth in the capital. Their latest album is “Battle Cry of Cuba and Zimbabwe.”

‘Obama, give me five’

On June 7, some 500 people gathered outside the White House to demand President Obama release the Five immediately. Two dozen young men on bicycles who had traveled throughout the city distributing information about the case joined the demonstration as it marched to the Justice Department. There some of the well-known people who took part in the conference addressed the crowd, including Cancel Miranda; parliamentarians from El Salvador, Brazil and Germany; representatives of Haiti and Chile; trade unionists from Australia and Britain; an ELAM student; and a young artist from the city of Washington.

On June 10, there is a meeting with parliamentarians, a visit to the place where Orlando Letelier was assassinated and visits to Congress. For a complete schedule and more information, visit 5daysforthecuban5.com.