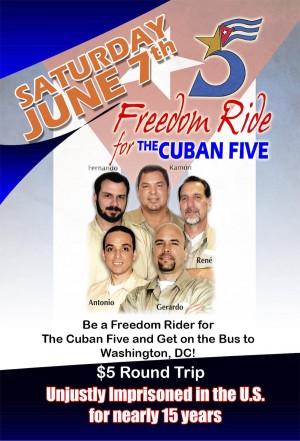 Cuba is awaiting the return of Gerardo Hernández, Ramón Labañino and Antonio Guerrero, the three of the Cuban 5 who remain unjustly held in U.S. prisons. Along with René González and Fernando González, who served their full sentences and returned to Cuba, these five men are heroes who risked their own lives to infiltrate Miami-based gangs who were bombing Cuban hotels and restaurants during the 1990s.

The June 1 headlines in the U.S. big-business press detail the intricate negotiations, military planning and dangers involved with the return of a U.S. soldier who was sent to fight to make Afghanistan safe for corporate mineral extraction. The soldier was exchanged for five Afghan prisoners held at Guantanamo, the U.S. torture concentration camp occupying Cuban soil.

“It should be easier to make a deal” in the case of the Cuban 5, writes Canadian author and journalism professor Stephen Kimber in a recent article. (tinyurl.com/mv67p3k)

After all, Hernández is now completing his 16th year of not one but two life terms plus 15 years. He was convicted in a tainted Miami trial on a charge even the prosecutors admitted could not be proven and eventually tried to withdraw: conspiracy to commit murder in the shootdown of two private planes that repeatedly and intentionally violated Cuban airspace. Kimber points out that Hernandez was in Miami and could not have played any part in that decision. The U.S. government has refused to release satellite images that might definitively determine whether or not the planes were still in Cuban airspace.

The real issue is that the U.S. ruling class has sought domination over Cuba since 1905. The imperialists must now face the reality of Cuban sovereignty and self-determination, which is building an economy and social system that prioritize developing human potential over profit. That is why Cuba excels in so many quality-of-life indicators like free universal education, health care and social security — even under a costly and damaging economic blockade imposed by the United States.

It is time to end the injustice done to the Cuban 5 and begin a new era in U.S.-Cuba relations. That is what is bringing international delegations to Washington, D.C., for the third “5 Days for the Cuban 5.”

For the complete schedule, go to 5DaysfortheCuban5.com. To watch the two-day conference via streaming June 5 and 6, go to justin.tv/cubaenwashington. Come out to the Dead Prez concert June 6 and rally at the White House June 7 at 1 p.m.