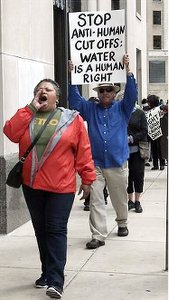 May 26 — The city of Detroit recently began to cut off water to residents behind in their bill. The measure — in effect telling the people to “Go thirsty, dirty and sewerless!” — was part of banker and emergency-manager-imposed austerity. It aroused a rapid protest.

The third “Detroit Freedom Friday” on May 23 shifted its location from the federal bankruptcy court to the Detroit Water and Sewerage Department headquarters on Randolph Street downtown. Under a DWSD banner proclaiming, “May is Drinking Water Month in Detroit,” angry activists chanted: “Water is a right! We’re going to fight, fight, fight!”

The Moratorium NOW! Coalition, one of the leading organizations opposing the emergency manager and the bankruptcy of this majority African-American city, says the primary reason the EM is shutting off Detroiters’ water is to “set the stage for the suburbs to take control of the Detroit Water and Sewerage System or to sell it off completely.”

City retirees fighting deep pension cuts joined with other anti-bankruptcy, anti-EM activists as well as environmental activists and others in protesting what organizers call “the life-and-death matter” of water as a human right.

According to Moratorium NOW!:

“Water is a right — Stop criminal shutoffs” and “EM Orr lives in luxury while 3,000 families per week get water cutoffs” were among the slogans on handpainted signs. One demanded “Justice for Charity Hicks,” a Detroit homeowner and activist who was arrested and spent three nights in jail after calling police in an attempt to stop her water from being shut off.

Visit moratorium-mi.org for information on the next Detroit Freedom Friday and the struggle against the city bankruptcy and austerity. A national demonstration is being called for July 24, the date the city of Detroit bankruptcy trial is to begin.