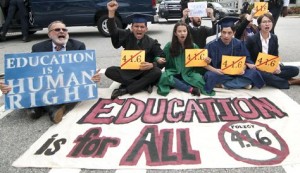 Atlanta —  Since 2010, undocumented students have been unable to attend the top five public universities and colleges in Georgia as a result of a Board of Regents decision: Policy 4.1.6. Many of these youth, brought to the U.S. as infants or young children, have received their entire elementary, middle and high school educations in the state, and often are high achievers. Yet despite their outstanding grades and other accomplishments, they not only cannot attend the top-ranked schools, but they are also required to pay international student tuition fees, often as much as five times higher than in-state tuition at other colleges in the system. These anti-immigrant actions have made it virtually impossible for undocumented youth to pursue higher education in the state.

However, this modern form of segregated education has not gone unchallenged. Board of Regents meetings are routinely attended by numbers of undocumented youth who, wearing their high school caps and gowns, speak passionately about their desire to further their education. These “Dreamers” have held dozens of rallies before Board meetings, organized events on the state’s many campuses, been interviewed by multiple media outlets, and spoken at protests against other right-wing and repressive laws.

The struggle to remove the ban and grant in-state tuition has escalated since June 2012, when the federal Deferred Action for Childhood Arrival program began, providing “lawful presence” in the U.S., including the right to work and receive a driver’s license, to undocumented youth who met certain criteria. Policy 4.1.6 is being challenged in court with a lawsuit filed by 39 DACA-qualified youth. While that case is pending, Florida, among other states, has moved to grant undocumented students in-state tuition.

On May 20, dozens of undocumented youth — from high school age to those who began the fight four years ago and are now in their 20s — took action at a Board of Regents meeting. With the support of community allies from “Moral Monday Georgia” and other groups, the students, in their high school caps and gowns, stood up and spoke out, addressing the appointed Board. As they were removed from the room by scores of police, their allies stood to demand the end of the ban.

Joining the larger group outside the building, the undocumented youth led the way to block the street in front of the building, symbolically protesting the blocking of school doors by the Board of Regents. Nine people were arrested, including three DACA youth, civil rights icon Joe Beasley, a professor from Freedom University, a labor activist and three leaders of Moral Monday Georgia.

Several speakers at the earlier outside rally made it clear that up until 1961 — just 53 years ago — African-American students had also been barred from attending the University of Georgia and other publicly funded colleges and universities. Recognizing that it took bold and mass action to defeat Jim Crow segregation, these students declared their determination to win their human right to education.