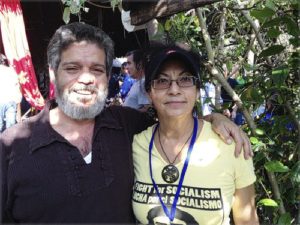 Two major events involving the Colombian guerrilla movement occurred this week: a ceasefire during the presidential elections and a partial agreement on the third item on the agenda of the peace talks between the Colombian government and the FARC-EP (Revolutionary Armed Forces of Colombia-People’s Army).

From the mountains of Colombia, Commander of the National Liberation Army (ELN) Nicolás Rodríguez and Commander of the Secretariat of the Central Staff of the FARC–EP Timoleón Jiménez issued a joint statement on May 15 announcing a bilateral ceasefire from May 20-28.

The action, published on May 15, was in response to the request by several sectors of the population, as outlined in this message: “Today, with regard to the upcoming electoral contest for the presidency of the republic, many voices have been raised, with a variety of arguments, requesting a new declaration of ceasefire from us with the intention that the climate in which the election takes place be characterized by the absence of disruptions.” (ELN-voces.com)

This ceasefire covers the offensive operations of the guerrilla forces against state and economic targets, but does not mean that they will refrain from using force, if necessary, to defend themselves from an attack.

What seems like a simple statement is really an oasis amid the disgusting character of the campaign for the presidency of the republic. There are five candidates to date — Marta Lucia Ramírez of the Conservative Party; Clara López of the Democratic Pole; Enrique Peñalosa of the Green Alliance; Óscar Iván Zuluaga of the Democratic Center; and the current president, Juan Manuel Santos of National Unity — but, according to the polls, only the last two are in contention for the post.

Between these two candidates, the campaign has deteriorated to harassment, allegations of corruption and collaboration with crime, etc. What is completely missing is a debate about the true and immense needs of the people and the solutions to their problems that either candidate would offer should he win.

Zuluaga is the candidate of former paramilitary President Alvaro Uribe; President Santos was Uribe’s defense minister. It should be remembered at this time that it was under the direction of Santos that the state murder of guerrilla leader Raul Reyes took place March 1, 2008, in Sucumbios, where the Colombian Air Force, with U.S. help, bombed the FARC-EP camp, killing Reyes.

Zuluaga and Uribe have been actively opposing the ongoing peace talks between the revolutionary forces and the government. This has gone as far as spying on the FARC-EP team in Havana. For that the Colombian attorney general has brought charges against a close aide of Zuluaga, which also implicates the illegal role of the U.S. Southern Command in listening to FARC-EP communications.

However, now that he is president, Santos is more interested in protecting commercial interests with transnational companies, so he is committed to the peace negotiations between the FARC-EP and the government. This is not because he really seeks peace with social justice, but because he wants the “peace of the graveyard” to allow foreign companies to operate without problems. His real interest is to forever silence and demobilize the guerrillas.

Even though President Santos talks peace while lashing out militarily against guerrilla forces, the negotiation process has taken on a life of its own and has forced discussion of national issues that have never been widely and publicly debated before.

In the current celebration of the FARC-EP’s 50th anniversary, one could remark that this partial agreement comes in time to celebrate its half-century of struggle. Although under the terms of the negotiations, which are that “nothing is agreed until everything is agreed,” this partial success is really a battle won in the war for peace.

Keep in mind that the suggestions and proposals in these negotiations have come not only from the parties sitting at the table in Havana, but from the thousands of people who communicate through assemblies held in Colombia, by email and through the webpage that the FARC-EP created for this purpose.

The current discussion on Item 3 is about the “Solution to the problem of illicit drugs” that has affected that country so much and whose implications go far beyond its borders. Washington’s role is the “elephant in the room” as a promoter of drug trafficking because, among other things, the U.S. is the country where there is the largest number of consumers and where many banks launder drug money.

The three subpoints in that discussion are: “1) Programs for substitution of illicit crops. Comprehensive development plans with community participation in the design, implementation and evaluation of substitution programs and environmental recovery of areas affected by these crops. 2) Prevention programs and public health; and 3) Solution to the phenomenon of production and marketing of narcotics.”

Although these are apparently just a few phrases, they have a huge impact and significance. They both directly and indirectly involve the development and ownership of land, which gets to the root of one of the main causes of the conflict. It involves improving the living conditions of the peasantry and their ability to produce and exchange their products legally under safe conditions, with sanitary methods and with passable roads. Also included is their right to a life, to obtain the materials they need and to eliminate toxins such as Monsanto’s glyphosate used to eradicate coca plants. This also means the decriminalization of traditional and cultural use of coca by Indigenous communities.

Also involved in this third point are health services, education about and prevention of drug use, among others, and punishment of the paramilitaries who are the main drug traffickers.

None of these demands could have been agreed to if these negotiations had never begun.

Now what is important is for the international community to reinforce its support and participation so that the negotiations continue to include, without punishment by the state, the voices of the people. And it’s important to step up the demand to free Simón Trinidad so that he can be included among those at the negotiating table.

Trinidad has excelled in the past as an intelligent and skillful negotiator, and from the beginning in 2012 his comrades have asked that he be incorporated into the negotiating team. This is the 10th year he has been in prison in Florence, Colo. His “trial,” held in Washington, D.C., was full of falsehoods. He was convicted of holding captive three U.S. agents with whom he never had contact; in fact, he was convicted for his connection with the FARC-EP.

Along with Mumia Abu-Jamal, Oscar López Rivera, Leonard Peltier, the Cuban Five, Russell Shoatz and the MOVE 9, Simón Trinidad is another of the many political prisoners in the United States of America. n