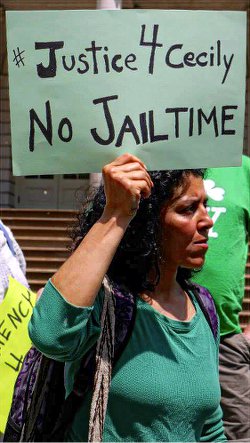 New York — Cecily McMillan, a 25-year-old progressive activist, was convicted of assault on a police officer in New York City Criminal Court on May 5. Now a convicted felon, she could receive a sentence of between two and seven years in prison.

The charge stemmed from McMillan’s arrest on March 17, 2012, when more than 70 Occupy Wall Street protesters were arrested, with numerous instances of brutality taking place, on the sixth-month anniversary of the OWS movement. That evening, as McMillan was walking by Zuccotti Park after celebrating St. Patrick’s Day with friends, Officer Anthony Bovell ran up behind her and violently grabbed her breast, leaving a huge hand-shaped bruise. She reacted to this sexual assault, throwing up her elbow in a startled reaction, giving Bovell a black eye.

After being handcuffed and thrown to the ground, McMillan began to have a seizure. She was prevented from receiving medical care as she writhed on the ground, gasping for breath. When McMillan was finally released from jail, she was nearly unable to walk.

At the trial, which began on April 7, key evidence was suppressed. National Lawyers Guild attorney Martin Stolar told the press how medical records of McMillan’s injuries, the details of the sexual assault and all sorts of video evidence were not shown to the jury. During the closing argument, prosecutor Erin Choi mocked the notion that police brutality exists at all, comparing it to belief in “space aliens.”

During the trial, the courtroom usually had between 30 and 50 McMillan supporters. In several instances, the judge ordered the courtroom cleared of observers for no apparent reason.

When the verdict was delivered, the courtroom was packed with over 38 police officers. Rather than allowing McMillan to await sentencing on bail, the judge ordered that she be immediately taken to Riker’s Island. As some of her supporters loudly protested, cops violently removed them from the courtroom, and McMillan was roughly cuffed and taken away.

A few hours after the felony conviction, over 300 people gathered in Zuccotti Park to protest the verdict. The only media covering this outpouring of anger by young OWS activists was Russia Today and PressTV, networks based in countries facing attack from U.S. imperialism.

McMillan remains on Riker’s Island awaiting her sentence. Friends and supporters report that she has gotten the nickname “Activista” from her fellow prisoners, and is in high spirits.

On May 8, McMillan was denied bail once again. The same day, 9 of the 12 jurors who convicted her signed a petition saying they do not want McMillan to do time in jail.

McMillan, who was also an activist in the 2011 Wisconsin labor protests, is known as an advocate of nonviolence and a supporter of the Democratic Party. She is the Northeast Regional Organizer of Young Democratic Socialists of America, the U.S. affiliate of the so-called “Socialist International.” At the trial, her defense emphasized that McMillan opposed Marxism-Leninism and instead embraced the teachings of reformist leader Eduard Bernstein who said, “The movement is everything, the aim is nothing.”

Many are calling the state’s targeting of McMillan, a woman who is obviously innocent and among the least radical elements within OWS, an intimidation tactic. The New York Police Department is hoping to frighten young people from participating in protests and demonstrations, while showing that activists can be sexually assaulted, beaten and given lengthy prison sentences basically for nothing.

Many OWS activists who engaged in militant acts of resistance during the events of 2011 and 2012 received misdemeanor charges and plea deals. McMillan’s conviction is based on her understandably startled reaction to suddenly having her breast grabbed. She received no offer for a plea bargain that did not involve pleading guilty to a felony.

McMillan will be sentenced on May 19. Her supporters are calling for large protests outside the courtroom.