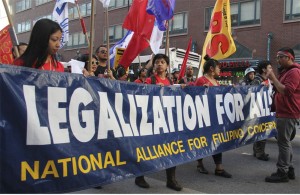 Union Square, New York City — Since a migrant upsurge in 2006 revived May Day in the United States, Union Square in this city has attracted those most unequivocally in defense of worker and immigrant rights — who call not merely for immigration reform but for legalization of the undocumented, without conditions. Union Square has drawn together the most militant and anti-imperialist forces in this huge, multinational city.

This year was no exception. Thousands of women and men, many with their children, traveled from all the city’s boroughs to this park, which for more than a century has been a traditional gathering spot for progressives. But this time, unlike those long-ago May Day events, people of color predominated and women made up at least half the crowd.

In other words, this May Day event gave voice to the majority of lower-paid workers in this city today, with documents or without. They are the ones who are giving new life and strength to the labor movement.

A taped greeting from political prisoner Mumia Abu-Jamal opened the rally. The crowd cheered and clapped as speakers and artists from scores of labor, community and left organizations explained the issues confronting low-wage workers in a city dominated by global billionaires.

Most of the groups represented immigrants — people forced mainly by the lack of jobs to leave their homes in countries in Latin America, the Caribbean, Asia and Africa. They assailed the neoliberal policies of capitalist globalization that have benefited a small handful of billionaires while destroying the jobs of millions of workers around the globe.

Others spotlighted the struggle for higher wages that has brought African Americans and immigrants together with unions, community groups and Occupy forces for many in-your-face confrontations with chain stores and restaurants.

‘Money for jobs & education, not for wars & occupation!’

Another major theme was the cuts in social services even as the U.S. government spends billions of dollars to promote an imperialist agenda in countries like Venezuela, Ukraine and Syria.

So many organizations participated in the three-hour-long rally that speakers were assigned one-and-a-half minutes for their greetings. Most stuck to it, although they clearly had much more to say.

Their talks were punctuated by cultural presentations — mostly by youthful singing and rap groups — expressing anger at capitalist oppression and solidarity with all the oppressed.

After the rally, some 4,000 to 5,000 people marched through lower Manhattan to Federal Plaza. They stopped and chanted at low-wage establishments, then at Stuyvesant Town to protest gentrification and finally at the 9th Precinct to highlight and oppose mass detentions and “stop and frisk.”

Among the many groups and speakers were:

The tremendous job of pulling together this great demonstration was achieved by the May 1st Coalition for Worker and Immigrant Rights.

Teresa Gutierrez, co-coordinator of the May 1 Coalition for Worker and Immigrant Rights, contributed to this article.