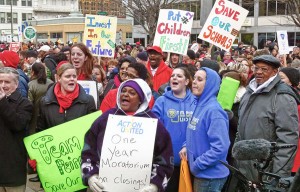 After failing to settle a contract with the Philadelphia Federation of Teachers for over nine months, on March 24 the Philadelphia School Reform Commission dropped a bombshell by announcing plans to eliminate seniority in hiring.

Claiming that the establishment of the SRC in 2001 gave them the power to “unilaterally impose new work rules,” school district Superintendent William Hite announced that starting in September 2014, principals would be given the “power to fill all vacancies and assemble staff” without having to consider seniority. (thenotebook.org, Mar. 24)

Not surprisingly, on April 3 the Pennsylvania Department of Education sided with the SRC, saying the rule changes were “essential to the SRC’s mission of stabilizing the district’s finances.” In their friend-of-the-court brief filed with the Pennsylvania Supreme Court on April 4, the PDE called “the collective bargaining agreement … a particularly high barrier to the District effecting reforms essential to providing services in a fiscally responsible and manageable manner.” (Philly.com, Apr. 7)

The PDE brief further stated that “collective bargaining must be circumscribed by statute when necessary to provide for a thorough and efficient public education in every part of the Commonwealth.”

This unprecedented attack on a public employee union’s right to collective bargaining is a continuation of a long-term plan to privatize public schools and dismantle their unions. The PFT rightly asserts that attacking seniority rights does nothing to resolve the fiscal crisis brought on by massive state budget cuts and poor policies during the SRC’s tenure.

The SRC and the PDE, acting on behalf of their for-profit charter school cronies, have used the fiscal crisis to bludgeon unions representing public school employees. Over the past two years the SRC carried out a privatization plan designed by the pro-profit Boston Consulting Group that included the closure of over 64 public schools, laying off teachers, nurses and other support staff, and outsourcing the jobs of over 4,000 unionized custodians, bus drivers and cafeteria workers.

The $3 billion BCG, whose board includes Mitt Romney, played a similar role in the privatization of schools in New Orleans, Seattle, Chicago, Dallas, Memphis and Cleveland, and in North Carolina.

The U.S. government paid BCG $7 million during the bailout of General Motors and Chrysler for consultation that resulted in drastic wage cuts and layoffs for unionized workers. BCG has been involved in efforts to privatize the U.S. Postal Service and eliminate rural delivery.

The teachers’ union is arguing that the state court has no jurisdiction in this dispute, which must be resolved through collective bargaining. PFT president Jerry Jordan labeled the PDE brief “outrageous,” noting that the state is the cause of the Philadelphia school districts’ fiscal crisis, not teacher seniority.

He added, “One of the most ridiculous assertions made by the PDE’s brief is that the SRC needs the freedom to impose working conditions in schools because of the district’s financial distress — a crisis that was created by the very administration the SRC represents!” He pointed out that Gov. Tom Corbett has cut more than $300 million in funding since he took office. (thenotebook.org, Apr. 7)

The SRC is a five-member panel with two seats appointed by the Philadelphia mayor and three by the Pennsylvania governor. At the time that the SRC was established under then Gov. Tom Ridge, plans were for a complete privatization of Philadelphia schools under the administration of Edison Schools Inc.

Widespread protests by students, parents and school staff at that time kept Ridge from fully implementing his plan. However, the SRC has continued to push for more private charter schools with nonunion staff.

Passed in 1998, Act 46 — the same state legislation that established the SRC — also opened the way to severely disable the teachers’ union.

The PFT, which acquired collective bargaining rights in 1965, last struck in 1981. In 1972-1973, the union leadership was jailed after a six-week strike that was only settled when the Philadelphia labor movement issued a call for a general strike.

While Act 46 severely limited Pennsylvania teachers’ right to strike, in September 2000, over 15,000 Philadelphia School District teachers voted unanimously to authorize the union to call a strike. The district had threatened drastic changes in work rules, working conditions, wages and benefits, including the elimination of seniority rights.

In response, Ridge expanded provisions of Act 46 that let the state declare the Philadelphia School District “in economic and academic distress,” displace the locally appointed Philadelphia Board of Education with the state appointed SRC, eliminate the teachers’ right to strike, and prohibit their union from negotiating a number of collective bargaining issues. This measure laid the basis for the struggle today.

The PFT has filed legal challenges to the SRC ruling, but it is critical that the battle over the work rule changes not be left to the courts to settle. Workers have no reason to look to the bourgeois legal system to defend their rights. The courts did nothing to stop the establishment of the SRC in 2001, and there is no reason to assume they would act any differently now.

Now is the time to go back to their roots and to return to the militancy and labor unity of the 1972 strike. Now is the time for all Philadelphia labor, whose members’ children attend those schools, to stand in solidarity with the teachers and against this attack on collective bargaining rights, including seniority. An injury to one is an injury to all.