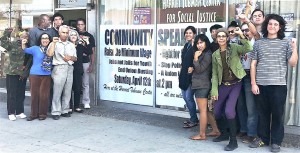 A “Low-Wage Campaign” community speakout was held April 12 in Los Angeles at the Harriet Tubman Center for Social Justice, which houses the International Action Center.

In spite at least two other compelling and competing events, the speakout was well attended, with calls for solidarity with low-wage workers and to raise the minimum wage to $15.

Organizations represented at the meeting included the Union of Progressive Iranians, BAYAN-USA and a taxi drivers organization representing many immigrant workers.

The program began with conga-playing poet Julio Rodriguez, who once performed with the Last Poets. There were updates on the “Our Walmart” victories by IAC organizer Maggie Vascassenno, a skit answering the usual questions against raising the minimum wage by IAC organizers Jefferson Azevedo and Ashley Sammy, a solidarity statement from the Southern California coordinator of BAYAN-USA, Theresa Jaranilla, and the setting of an action plan for a car caravan on May 10. Jaranilla announced that BAYAN-USA is working on a campaign targeting wage theft by employers of low-wage workers in the southern California city of Long Beach.

Almost everyone participated and took the mike to either testify to their own challenges trying to survive on low wages and/or suggest action proposals to fight back. In addition to those in attendance, the office received a higher than average response in building for this event with numerous phone call inquiries and participation from many individuals who first heard about the speakout at a street meeting prior to the April 12 event.

Everyone at the speakout was enthusiastic about working on this campaign and the action plan that came out of the meeting: to build a car caravan (including bikes) to protest on May 10 demanding a $15 minimum wage and respect, dignity and the right to a union for fast-food and retail workers. The caravan plans to make stops at various fast-food restaurants in Los Angeles, where quick protest rallies will be held, as well as stops organized by community block clubs in the South Central neighborhood.

The next community speakout is being organized by the Harvard Boulevard Block Club and the International Action Center at a local church — The Ray of Light Baptist Church in South Central — also in May.