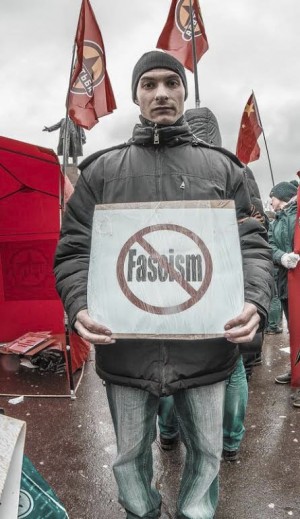 April 15 — A coordinated military attack has begun against the anti-fascist resistance in Southeastern Ukraine.

The attack began hours after the U.S. confirmed that CIA Director John Brennan had visited Kiev on the weekend of April 12-13 for secret meetings with coup leaders. In other words, Washington gave its approval for the impending attack.

Overnight on April 14 came numerous reports and videos of Ukrainian tanks moving toward cities in the Donetsk region, where forces opposed to the Kiev coup regime have seized government buildings and declared an independent People’s Republic in Donetsk.

Media reports confirmed that a major attack was underway in cities of Kramatorsk and Slavyansk in the Donetsk region. Casualties are reported among the anti-fascist fighters.

In Kharkov, the office of the leftist Union Borotba (Struggle) and People’s Unity coalition was again seized by right-wing militias on April 15. Borotba has been leading a protest movement there demanding a regional referendum on autonomy from the Kiev coup regime.

The Kiev junta has begun an “anti-terrorist operation” against those in Southeast Ukraine who rebelled against the oligarchs and nationalists. There is an absolutely false campaign in the oligarchic media to discredit the rebels. Supposedly we are all agents of the Russian secret services.

This is a blatant lie. Ukrainian citizens rebelled against the junta. Among the 64 political prisoners arrested in the Kharkov Regional State Administration, all are citizens of Ukraine and Kharkov-area residents.

On the other hand, there is increasing evidence that the junta intends to use mercenaries from private military companies — including foreign ones — against the rebels. Ukrainian police and military personnel have refused to fight against their own people. Kharkovites have seen police on Freedom Square with St. George’s ribbons tied to their shields, showing they are with the people. In this situation, the junta will rely on mercenaries and neo-Nazi groups such as the Right Sector, which they have hurriedly dressed in the uniform of the “National Guard.”

Union Borotba declares that the People’s Republic is the creation of the protesters in the Southeast, not the machination of Russian special forces. This is the will of the people in the Southeastern provinces.

The Universal Declaration of Human Rights adopted by the U.N. speaks of the right “to have recourse, as a last resort, to rebellion against tyranny and oppression.” The people of the Southeast have exercised that right.

The junta wants to suppress the rebellious people by military force, organizing an “anti-terrorist operation.” We declare that it is impossible to win this war against its own people. In trying to suppress the people’s movement, the junta digs its own grave.

A smear campaign has been unleashed against the forces leading the protests, including Borotba. All these lies aim to split our movement and sow distrust among activists.

Borotba advocates unity of the protest forces. We oppose the junta, which stands for the country’s richest oligarchs, supported by Western imperialism. In this confrontation, unity and cooperation of all organizations and leaders of the protest movement are crucial. To do this, we have created a voluntary association of organizations, advocates and citizens of Kharkov — Popular Unity. Popular Unity is open to all. In unity — there is strength.