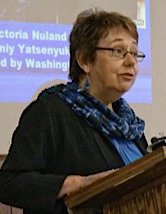 Anti-war and anti-imperialist activists in Chicago held a successful public teach-in on U.S.-NATO aggression against Ukraine and Russia on April 12 despite the U.S. ruling-class media’s political pressure and despite having to beat back a physical attack by pro-fascist organizations here.

The U.S. population overall is war weary and wary of any new adventure in Ukraine, especially one where the two major nuclear powers are in a confrontation. Still, not only the overall sentiment but actions even by small groups can be decisive at the beginning of a struggle.

The meeting underlined two important lessons for progressive activists organizing in the U.S. on this issue. Ideological firmness is always needed to withstand the pressure of U.S. imperialism’s propaganda machine. And a united front providing organized self-defense and security is often necessary to assure the protection of progressive ideas.

The title of the meeting was “A Chicago Teach-in: Stop U.S./NATO — No New Cold War over Ukraine.” The organizations calling the meeting included Workers World Party (workers.org/wwp), Freedom Road Socialist Organization (fightbacknews.org), the American Labor Party, Students for a Democratic Society and the International Action Center. It was held at the United Electrical Workers union hall.

The speakers countered ruling-class propaganda by exposing the fascist role in the Kiev coup government of Ukraine and laying out the history of U.S.-NATO encroachment into countries ever closer to the Russian border in order to encircle Russia militarily since the fall of the USSR in 1991. Flounders’ explanation included a slideshow that illustrated the expansion of NATO, the role of the fascists and the rising, popular, anti-coup movement in the East of Ukraine. (access slideshow at no2nato.org/ukraine/)

Defense stops fascists at the door

Casal was speaking on the historical roots of Ukrainian fascism and how U.S. imperialism gave support to fascist groups after the German Nazi occupation of the Ukrainian Soviet Socialist Republic ended in 1945.

“Casal was halfway through,” Derek Thacker told WW, “when a clamoring of footsteps and shouting were heard outside the UE labor hall.  Pro-fascists from Chicago’s Ukrainian community were gathering at the front door. I was suddenly drafted into the site’s security team. The 40 or so right-wing demonstrators carried signs comparing Russian President Vladimir Putin to Adolf Hitler, as well as the flag of the Organization of Ukrainian Nationalists, the group which in 1941 proclaimed the independence of Ukraine shortly after the Nazi invasion of the Soviet Union.”

A handful of fascists and extreme nationalists got into the meeting. Others, locked out, repeatedly tried the door and shouted angrily at the security volunteers standing watch inside. One of the group who had been allowed in earlier then stood in the doorway while the right-wing crowd from outside surged forward in an attempt to break into the hall and disrupt the meeting. The security guard blocked them and forced all of them out, along with anyone else who tried to disrupt.

While there are even larger Ukrainian-origin communities in New York and Philadelphia, as well as in Edmonton and Toronto in Canada, Eric Struch, who chaired the meeting, told WW about the special rightist mobilization in Chicago:

“There are U.S. sections of the Ukrainian organizations Svoboda and the Right Sector that are active in the Ukrainian Village neighborhood of Chicago. They hosted an event supporting the illegal Feb. 22 coup, which was attended by Sen. Dick Durbin (D.-Ill.), and they have been displaying the hated red and black flag of the fascist UPA-OUN, the Nazi collaborationists responsible for the deportation of thousands of Ukrainian Jews to death camps.”

Struch told of a March 22 anti-fascist demonstration that was harassed and photographed by a large group of Ukrainian-origin fascists, which finally had to defend itself.

Not all those of Ukrainian heritage support the ultra-right forces. There is a long history of participation by Ukrainian-origin workers in progressive and even revolutionary labor organizations in North America. (See “Don’t forget Ukraine’s communist traditions,” WW, March 4.) But U.S. imperialism has nurtured the most reactionary Ukrainian organizations and kept them alive.

“All things considered,” Thacker concluded, “the multi-organizational coalition succeeded in carrying out the meeting and paving the way for future cooperation between anti-fascist forces, despite the interference of enemy agents and being besieged by hostile racists. This simple act of self-defense in the face of intimidation is crucial for the revolutionary struggle against racists and fascists at home and abroad.”