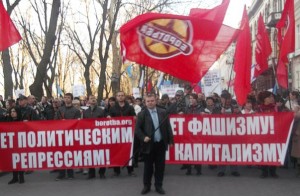 April 1 — On the morning of April 1, Ukrainian Security Forces (SBU) agents raided the apartment of Odessa, Ukraine, anti-fascist leader Alexei Albu with a warrant authorizing them to search for lists of activists and for weapons.

The raid was not unexpected.

Albu, an elected member of the Odessa Regional Council and local coordinator of the leftist Union Borotba (Struggle), was called in for questioning by the SBU on March 11 after he presented a proposal for a referendum on regional autonomy at the council.

Another local resistance leader, Anton Davidchenko, was seized by special forces on March 17 and kidnapped to Kiev, Ukraine’s capital city.

On the eve of the raid, the local “Euromaidan” movement — supporters of the pro-Western, fascist-dominated junta in Kiev — held a rally outside police headquarters demanding the arrest of Albu and other prominent anti-fascists.

“The Euromaidan nationalists openly demand that the special services subject us to violence,” Albu said. “This shows how repressive and anti-democratic in its essence the Euromaidan movement and the Kiev regime truly are.”

Albu was not staying in the apartment and is safe — for now.

The raid came after the fifth consecutive weekend of anti-coup demonstrations across the industrial southeastern region of Ukraine. The protest in Odessa on March 30 was particularly significant, swelling in size to several thousand from about 1,000 the previous week.

Albu was a convener of the powerful march.

At demonstrations in Odessa, Kharkov, Dnepropetrovsk and other cities, Borotba activists raised the slogan: “No election without a referendum.”

The coup regime in Kiev has called for presidential elections on May 25. While it unclear if the elections will actually happen on that date, given the infighting among the pro-fascist forces in the capital, it is clear that the U.S. wants a vote to happen soon to give the junta a veneer of respectability.

The aid packages being discussed in the U.S. Congress and with the International Monetary Fund are probably contingent in some way on the elections being carried out.

The demand widely embraced by the masses in southeastern Ukraine is for a referendum on autonomy.

This means different things to different people. Some hope to follow Crimea into the Russian Federation. Others want to remain in Ukraine but with a high degree of independence from Kiev.

The most radical forces, like Borotba, also call for the regional renationalization of industry to protect workers’ living standards — and as a step toward the restoration of a socialist Ukraine.

Taking a different approach, the Communist Party of Ukraine (KPU) has nominated its general secretary, Peter Simonenko, to run for president in the May elections. The KPU leadership has continued to assert its rightful place in parliament, though the party has been effectively banned in western Ukraine since the coup.

Externally, the KPU has been working to rally support among the Western European parliamentary left to put pressure on the Kiev regime.

Simonenko’s election platform calls for greater local control and legal changes to make it easier to call a referendum, along with the restoration of democratic rights and social and economic protections for workers.

With the Kiev regime in crisis and growing pressure from the U.S. and European Union to bring the country under control, it is likely that repression will continue against the revolutionary left and other anti-fascist forces, whatever their orientation toward the elections.

More international solidarity will be needed in the coming days and weeks.