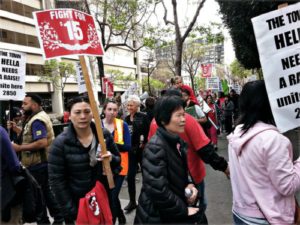 Oakland, Calif. — Organized by UNITE HERE Local 2850, on March 27 several hundred East Bay hotel, restaurant and stadium workers marched for jobs, rights and power under the call of “The Town Hella Needs A Raise.” (“Hella” is a common slang term in the Bay Area, meant to convey a strong and emphatic expletive.)

Concerned that the Lift Up Oakland coalition’s ballot initiative for a $12.25 minimum wage was undercutting the national drive for $15, some labor activists organized a contingent within the march entitled “The Town Hella Needs To Fight for $15.”  They carried signs and distributed buttons with the “Fight for 15” slogan. The buttons and signs were eagerly accepted by marchers, and many of the chants called out for a $15 minimum wage as well.