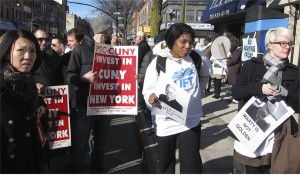 Teachers at all levels protest in Brooklyn, N.Y.

They were protesting across the street from state Sen. Marty Golden’s office because he supports a budget that sells out NYC public schools in favor of charter and private schools. This budget also leaves the City University of New York and NYC’s K-12 schools woefully underfunded, while giving tax breaks to the banks, big corporations and the 1%. It says “no” to New York state’s DREAM [Development, Relief, and Education for Alien Minors] Act and allows for the privatization of the State University of New York Downstate Medical Center.

The New York State United Teachers, to which both the PSC and UFT belong, has sponsored nearly 20 demonstrations throughout the state demanding more money for education. NYSUT is also sponsoring a statewide ad campaign.