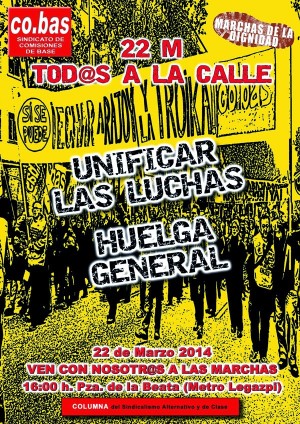 Demanding dignity and “food, a job and a roof over everyone’s head,” hundreds of thousands of people marched on Madrid on March 22.

Organizers estimated that 2 million people took part in the protest. The government started off with a ridiculous estimate of 35,000-50,000 and then mumbled a vague retraction.

The organizers rented four trains and hundreds of buses to bring people from all over Spain — from Catalonia in the east, Andalusia in the south, Asturias and the Basque Country in the north. Some people walked for weeks, which not only got them to Madrid inexpensively but raised awareness of their struggle in the many towns they passed through.

The marchers gathered in eight spots on the outskirts of Madrid the night before, and then the columns converged for a giant rally in the center of the city.

The large coalition that called the rally grew out of the “indignant” movement of 2011 and 2012, under the whip of an austerity program that has proclaimed it is going to make 150 billion euros (about $200 billion) in cuts during the next three years.

Commenting on the government’s program, Sánchez Gordillo, mayor of Marinaleda and a deputy from the United Left coalition in Andalusia, told French television: “The real rate of unemployment is 37 percent and 42 percent of Spaniards are living under the poverty line. … Without a job, no one has dignity.” (TV5, March 22)

Gordillo came to prominence in August 2012 during raids on supermarkets in Sevilla and Cádiz, in which he was among the people who stole food and handed it out to poor families.

Spanish youth were a very prominent and angry section of the marchers. Unemployment among those under 25 is at more than 50 percent, in Andalusia it is near 75 percent.

The Madrid authorities brought in 1,700 riot police. They attacked the demonstrators when, towards the conclusion of the rally, a large group of protesters attempted to “occupy” the square in front of the parliament. YouTube videos of the scene show cops attacking the protesters to break up the attempted “occupy” while at the same time preventing people from leaving the area.

The main struggle between the cops and the protesters came after the rally was concluded and night fell. Crowds of mainly young people, carrying a banner reading “No pasarán” (“They shall not pass”) and iron bars to break up sidewalks and curbs, confronted the cops, who were firing rubber bullets.

When a squad of cops ran out of bullets, the youth rushed them. There was a toe-to-toe melee, the youth using their bars and the cops their batons, until the cops retreated. These skirmishes were documented on both French television (TV2 and TV5) as well as YouTube. A police patrol car with cops in it was completely trashed.

Figures given by Le Monde on March 22, relying on Agence France Presse, indicate that the cops didn’t have enough forces present to deal with the size and militance of the protesters. Some 102 people were treated by emergency services, 67 of them cops. The movement argues that the cops’ brutality reflects the regime’s growing dictatorial attempts to repress protest.

The German finance ministry released a statement at the end of February demanding that the European Union maintain its austerity policies. This is going to be difficult to do in Spain, where the anger of the youth over unemployment and a devastating economic future has reached the boiling point.

One reason the French media covered the struggle in Spain intensely is that austerity is also a political issue in France, although it has not yet caused as much pain among the working class.

Still, on March 18, tens of thousands of people took to the street throughout France to protest against the latest austerity pact. The program was created by French President François Hollande and ratified by the MEDEF — the association of French businesses — and the CFDT — a major labor confederation connected to Hollande’s “Socialist Party,” which is really a pro-imperialist and anti-worker party.

There were 140 demonstrations throughout France, all involving at least partial one-day strikes, with major ones in Marseille, Toulouse and Bordeaux. The union confederations that called and supported these protests — Workers’ Force (FO), Solidaires and the General Confederation of Labor (CGT) — say that these cuts would destroy the public services used by a majority of the people in France.

There will be more protests in France and other European countries as the imperialist banks increase their pressure for austerity — for the workers — and as the bosses cut wages to increase profits while the economy stagnates.