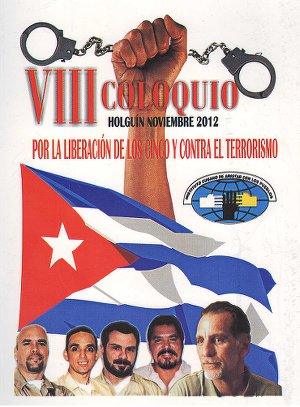 Uruguayan President Jose Mujica broke through the U.S. corporate media blockade and made headlines about the Cuban 5 heroes — three of whom remain in U.S. prisons. In a radio broadcast on March 21, Mujica reported that Uruguay would accept prisoners from the notorious U.S. Guantanamo concentration camp and also urged the U.S. to free the Five.

“We’re not embarrassed to say that we asked the North American government if they would please do what they could because those two or three Cuban prisoners, they have been there many years, a way is being sought to free them, because that is also shameworthy,” said Mujica. (Reuters.com)

Mujica raised humanitarian release for the remaining Cuban 5 heroes — Gerardo Hernández, Ramon Labañino and Antonio Guerrero — while providing a path for President Barack Obama to finally fulfill his promise to close Guantanamo prison. This act shows how international pressure has increased to end the Cuban 5’s nearly 16 years of injustice.

Latin American and Caribbean countries stand united against the U.S. economic blockade and political isolation of Cuba. Even some Florida elected officials are open to allowing a resumption of trade and travel to the island. A recent poll by the Atlantic Council revealed that there is majority sentiment against the U.S. blockade and that it is stronger in Florida than in the rest of the U.S.

A new, massive deep-water Cuban container port at Mariel Harbor, built together with Brazil, is prepared to handle superships from Asia through the widened Panama Canal. The U.S. government can no longer use the dwindling number of Cuban exiles in Florida who fled the island in 1959 with dictator Fulgencio Batista as a pretext for its goal of destroying Cuba’s hard-won sovereignty and independence.

Who are the Cuban 5?

The Cuban 5 are Cuban state security agents who were willing to make the great sacrifice of posing as traitors to the Cuban Revolution — thus damaging their reputations and relationships with their families and friends — to infiltrate the Miami-based paramilitary organizations responsible for bombing hotels and restaurants in Cuba in the 1990s. These groups committed terrorist murders of tourists in an attempt to sabotage that vital Cuban industry. South Florida CIA-trained exile networks planned and funded the assaults.

Convicted of conspiracy charges, sentenced to long prison terms, the Five began their terms in U.S. prisons on Sept. 12, 1998. Two, René González and Fernando González, completed their full sentences and have returned to Cuba.

Mujica’s offer to resettle prisoners from the U.S. Guantanamo camp, along with their families, is a humanitarian gesture by a political activist who was himself imprisoned for more than a decade by the past Uruguayan dictatorship. That regime was one of many throughout Latin America supported by the U.S. government, military and corporate interests. Mujica said plans were not yet finalized for five men to be transferred from Guantanamo to Uruguay, although Uruguayan officials have visited the prison.

For more than ten years, the U.S. has held prisoners at Guantanamo who have never even been brought before a judge, Mujica noted. Guantanamo is most recently known for the desperate, mass-prisoner-protest hunger strikes. The prison regime uses torturous force feeding to prevent Washington’s exposure as a human rights violator due to potential mass suicide of Muslims.

Mujica’s request to the Obama administration was distributed by major corporate news networks, including Associated Press, Reuters and Agence France-Presse, and has been picked up by ABCnews.go.com and news outlets from Idaho to Miami.

Cheryl LaBash is an organizer of “5 Days for the Cuban 5” in Washington, D.C., June 4 to 11. For more information, go to 5daysfortheCuban5.com.