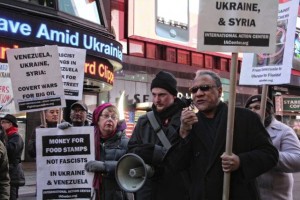 Anti-war activists rallied in New York’s Times Square in the bitter cold on Feb. 27 to protest the U.S. and European Union’s blatant intervention that is promoting fascist elements against the people of Venezuela and Ukraine. The International Action Center and Fight Imperialism, Stand Together (FIST), a youth organization that had scheduled a regional conference here on March 2, called the action, which other anti-imperialists joined.

The protesters held a picket line and speakout, chanting: “Money for jobs, not fascist mobs!” “U.S., CIA, out of Ukraine!” and “Chávez presente, Maduro presidente!” Speakers at the rally emphasized the importance of immediately taking a strong stand against the new wave of U.S./EU imperialist aggression.