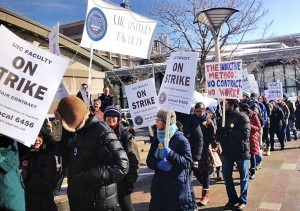 The repetitious argument about how a college education leads to higher-paid, more secure jobs overpowers both the huge explosion of student debt — to well over $1 trillion — and the fact that much of this college education is provided by low-paid, highly insecure, contingent workers, generally called adjuncts.

The data on this phenomenon are voluminous, fragmented and contested. The American Association of University Professors and the American Federation of Teachers, Higher Ed Division, both assert that between 65 and 75 percent of all college teaching is done by adjuncts. And almost all of these adjuncts get paid less than $30,000 a year, which is underpaid work which, nevertheless, requires an advanced degree.

Adjuncts get far, far less than the administrators — deans, chancellors, provosts, vice presidents and presidents — whose base salaries generally run between $200,000 and $400,000.

The strike that Local 6456, University of Illinois at Chicago United Faculty, held Feb. 18 and 19 was strongly supported by both the full-time and part-time faculty, even in departments like engineering, where sympathy for militant action is generally rare. Graduate student teachers, whose contract has a no-strike clause, had to continue teaching, but they and a number of students joined the picket lines and rallies the UICUF held on campus.

So much support and encouraging emails came from students, both current and former, that a number of teachers told the Chicago Sun and the local NBC station how encouraged they were.

In a statement, Joe Persky, UICUF president, said: “The heart of UIC is its faculty and its students, but the Illinois Board of Trustees short change them both. They take more of our students’ tuition money, and even with hundreds of millions in profits each year and more than a billion dollars in reserves, they refuse to pay professors what they’re worth. Many of the faculty who teach our first-year students make only $30,000 a year! The administration’s priorities don’t match our mission, and after trying to negotiate a fair contract for eighteen months, they left us no choice but to strike, which only strengthened our unity and resolve. It’s time for the University to get as serious as we are, and settle this contract now.” (uicunitedfaculty.org)

For decades, in thousands of institutions of higher education, highly paid administrators have been trying to turn highly skilled college teaching into low-paid work. UICUF’s strike is part of an effort to push back this trend.