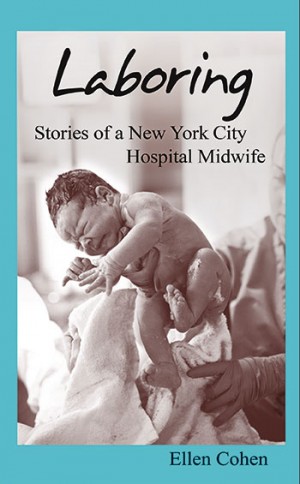 Ellen Cohen, who delivered 1,400 babies over nearly three decades, has written an engaging, poignant memoir, “Laboring: Stories of a New York City Hospital Midwife” (CreateSpace, 2013, 159 pages, $15.95). Her purpose is “to illuminate the pain, joy and occasional heartbreak of childbirth, as well as shed light on the challenges facing both mothers and midwives.”

Cohen succeeds heroically. Starting the book with a bang, Cohen describes a daunting scene: helping an obviously psychotic woman, full term but in complete denial of her pregnancy, to deliver a healthy baby on a hallway floor. To do that, she relied on a teacher’s instruction: “Always ask the patient … what she thinks is the problem.”

Listening to women lies at the heart of midwifery, which has been practiced for centuries in cultures the world over. Cohen explains why she, a mother of two, wanted to become a midwife: “I would bring empathetic and empowering care to birthing mothers, my hands and voice the gentle instruments I could offer my sisters in their vulnerable, and most powerful, moments.”

Cohen explores dozens of moments as she chronicles experiences at three New York City hospitals and an HIV clinic, where she participated in research that led to the first breakthrough in preventing mother-to-child transmission of the AIDS virus. Lincoln Hospital in the Bronx, the first place Cohen practiced, may have been understaffed and poorly funded, but, as Cohen witnessed, the team of labor and delivery workers provided the highest quality of care to the multinational population of working and oppressed people it served.

What drives the book is Cohen’s description of different situations, like guiding a woman, whose first birth had been a cesarean, to successfully deliver her second child without invasive surgery. One patient, who knew the drill on prenatal care after having five children, was surprised but delighted to deliver twins. During one 12-hour shift, Cohen delivered her personal best: five babies. Imagine the focus and dedication needed to do that!

Dealing with unpredictable demands of the job were taxing and exhilarating. To fulfill her promise to a young man that he could attend his child’s birth, Cohen had to do some quick maneuvering when the baby arrived very fast. With a nurse’s help, she adroitly enabled the new father to cut the umbilical cord and hold his child. In one very demanding case, the woman started hemorrhaging after expelling the placenta. Cohen had to reach inside to massage her uterus until she felt it become firm, indicating she’d stopped the bleeding — and saved the mother’s life.

In addition to delivery, Cohen addressed the whole range of women’s gynecological needs, providing counseling on prenatal concerns, breast feeding, sex education, contraception and sexually transmitted infections. One example of such counseling reveals Cohen’s humor, which she sprinkles generously throughout the book. After urging a noncommittal new mother to think about birth control, the woman admitted she was gay. “That’s an effective method,” quipped Cohen.

Dealing daily with blood, sweat and other bodily fluids; diverse patients and family members in a highly emotional situation; and the frantic pace of coaching mothers and catching babies, Cohen conveys the chaos with excitement, energy and abiding compassion. It’s easy to understand why she loved the many challenges of the job as she rose to meet them.

The title of the book,“Laboring: Stories of a New York City Hospital Midwife,” is an apt play on the word “laboring.” It conveys not only the work mothers invest in the birthing process, but the work of the midwives who enable and encourage them.

The book makes a valuable contribution to the women’s health and reproductive justice movements by revealing, through exciting real-life stories, the midwives’ mission: “to give our patients confidence in themselves and make every woman feel valued as we guide them safely through birth.” Such empowerment of women in this society is unusual, though it should be every woman’s right.

Ellen Cohen’s tales of multinational teams of workers serving working women of all colors are truly inspiring. Her vision of how best to serve mothers and babies is ideally what should happen in a caring, supportive, egalitarian society.