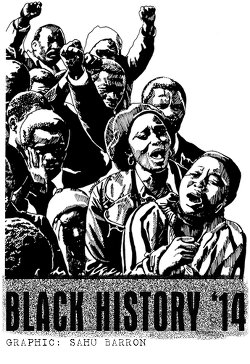 The federal government’s main motivation was to deprive the Southern slavocracy of their labor force, not some moral freedom ideology.

Professor Jim Downs, author of “Sick from Freedom: African American Illness and Suffering During the Civil War and Reconstruction,” says that in the transition to freedom from 1862 to 1870, hundreds of thousands of freed slaves never lived long enough to enjoy their freedom. A lifetime of suffering was followed by a massive death toll.

The portrayal of newly liberated people, with their belongings piled high as they journeyed toward freedom and into a bright new world of opportunity, is far from factual. Many had no shoes and only the clothes on their backs. During the winters, many froze and starved to death. They were without shelter and experienced severe hardships and suffering. Enslaved Africans in Texas were not freed until June 1865, as slave owners there ignored the proclamation for two years.

Freed slaves entered a completely foreign and hostile world. They were illiterate, since it was a crime for them to read or write, and segregated. They had no knowledge of the monetary system or of social customs, and no paid jobs.

Millions of newly freed slaves succumbed to yellow fever, dysentery and other diseases. It is estimated that at least 1 million of the 4 million former slaves got sick or died between 1862 and 1870. That’s not counting the large numbers of enslaved Africans who were worked to death, beaten to death or lynched on plantations by slave owners.

Many runaway slaves fought for the Union during the Civil War to protect themselves and their families, and they were told they’d gain their freedom if they did so. Military service was a condition that the federal government placed on former slaves in return for government aid. About two-thirds of all Civil War casualties came from disease; many Black soldiers were killed and never saw emancipation.

During the war, escaped slaves congregated in what were called “contraband camps,” under horrendous conditions. Similar living conditions existed in the settlements of freed people after the war.

Former slaves faced a huge health crisis as the smallpox epidemic, which started in Washington, D.C., spread through the South to freed slaves traveling North and to those wandering and searching for family members from whom they had been separated when sold. The epidemic was worsened by the lack of proper medical care, malnutrition, extreme poverty and unimaginable living conditions.

At the height of the epidemic, the medical division of the federal government’s Freedmen’s Bureau built and operated 40 Black hospitals throughout the South to identify and support a “healthy workforce.” It wasn’t about providing medical care as much as to “weed out” dependent women, children and the elderly, separating the sick from the healthy and able-bodied. The bureau’s priority was to produce strong workers to meet the demand in the North or send them back to working in the fields, and then close these hospitals as soon as possible.

The outbreak was seen as a “Black epidemic” and not worth giving much attention to. Meanwhile, an 1866 cholera outbreak, which mainly affected whites, was vigorously combatted.

The so-called “Black epidemic” was blamed on the victims at the instant of their liberation. The same racist policies were exported to the western frontier. The federal government used Reconstruction in the South as a model for “dealing with” the Native peoples, deliberately exposing them to debilitating diseases to “wipe them out.”

Records of the medical division of the Freedmen’s Bureau contain heart- -wrenching encounters of sick and dying freed people. To some in the North, the dismal conditions of freed people was evidence that the Black race was doomed to extinction.

The indifference to the plight of former slaves who perished was followed by apathy toward the conditions of African-American descendants during the 100 years of government-sanctioned “Jim Crow” apartheid and its “acceptable” violence in the South, and continuing racial discrimination throughout the country.

Horrible living conditions affecting formerly enslaved Africans are seen in some 21st-century communities of their descendants. The present-day disparities in education, home ownership, employment, access to proper medical care, poverty levels, malnutrition, homelessness and the wealth gap harken back to previous times. Racist federal, state and local government policies have resulted in African Americans remaining at the bottom of the socioeconomic ladder and ensure a lifetime of second-class citizenship. There has never been a level playing field, and racial discrimination results in African Americans continuing to be denied full integration and participation in society.

The institution of slavery has been replaced by institutional racism in every system. Resistance to social, political and economic equality is strong and persistent. Struggles of African Americans to overcome their adversities and obtain equal civil and human rights have been met with continuing deterrence, even violence. The ideology of white supremacy, dominance and control, the practice of white-skin privilege, and prevalence of the disease of racism is still a fact in the U.S.

Slavery in the U.S. existed for three centuries, from the 1600s to the 1800s. Black people have been free from bondage for 151 years. How many more centuries will it take before African Americans achieve true liberation?