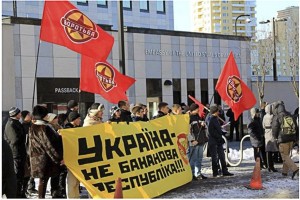 U.S. spying devices record phone calls of enemies, allies, neutrals and bystanders alike. Do U.S. officials think no one records their own calls?

It seems that one such call was recorded and leaked to the Internet. It revealed much about U.S. and European Union imperialist intervention in Ukraine as well U.S.-EU tactical differences.

On Feb. 6, Victoria Nuland, U.S. assistant secretary of state for European affairs, discovered that someone considered her recent phone discussion with the U.S. ambassador to Ukraine, Geoffrey Pyatt, too frank and pithy to remain in the archives.

First of all, their conversation showed Washington considered it perfectly normal and reasonable not only to have an opinion on who among the Ukrainian contenders should run the country, but to intervene to make sure a U.S. favorite won. In addition, it showed that the U.S. is contemptuous of the role of its EU partners, who are also imperialist rivals.

In December, after handing out pastries to opposition demonstrators in Kiev, Nuland returned to boast to a Ukrainian-American group in Washington that the U.S. had invested $5 billion in establishing a Western-friendly government in Ukraine.

It is worthwhile to listen to the Nuland-Pyatt chat, which is still easily available all over the Internet. Her frank “F… the EU” got the most media play, but more revealing than her apparent frustration with EU tactics was her matter-of-fact attitude toward manipulating Ukrainian politics.

The EU reacted mainly to insist that its intervention in Ukraine was just as effective as Washington’s. No one even tried to deny that both imperialist blocs were pushing to sever Ukraine’s close economic ties with Russia and move Ukraine under Western imperialist domination.

As we made clear in our last article on Ukraine, the revival of capitalist relations in Ukraine and Russia since 1991 has virtually collapsed the Ukrainian economy. Currently the country is on the verge of declaring bankruptcy and failing to pay its debts, and its population has declined by 6 million, mostly migrant workers who went to Europe or Russia.

Citing instability in Kiev, the Russian government has withdrawn its offer of $15 billion to help Ukraine pay its debts. Meanwhile the EU is offering nothing substantial but demands that Ukraine open its markets to EU goods, impose austerity and borrow more money.

Fascist anti-Russian groups have been more and more active in the streets, battling the government’s police.

Some Ukrainians are beginning to fight back. One group, Borotba (Struggle), describes itself as representing four or five anti-capitalist and anti-racist groups, including former members of the youth organization of the Communist Party of Ukraine. They organized demonstrations at both the U.S and British embassies in Kiev on Feb. 5 and 6, respectively. The main slogans were “Ukraine is no colony,” “Against the oligarchs and fascists” and “No civil war in Ukraine.”

In a statement at the U.S. Embassy protest, Borotba said of Western politicians:

“At present they brutally interfere in Ukrainian domestic affairs, pushing us into the abyss of civil war. Some Western politicians — baroness Catherine Ashton, Czech ‘euro-commissioner’ Stefan Fule, ex-president of Poland Alexander Kvasnevskiy, U.S. right-wing senator John McCain, Irish neoliberal Patrick Cox and a number of other high-ranking officials — visit Ukraine nearly every week to intimidate corrupted officials in the Yanukovych government and to lend full support to the right-wing opposition.

“The ambassadors of the leading EU countries and the U.S. don’t feel embarrassed to visit personally the bases of the ‘Right Sector’ to express their favor to these Nazi militants — those who unleash street violence and torture innocent people in Ukraine. There is no doubt that they give not only full moral support (thus legitimizing Nazism) but actually finance civil war in Ukraine.” (borotba.org) n