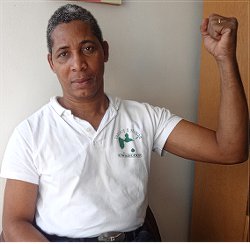 Jocelyn Lapitre, a leading trade unionist from Guadeloupe, visited New York from Jan. 21 to Jan. 24 to garner support and solidarity for his organizations, the General Union of Workers of Guadeloupe (UGTG) and the Coalition Against Exploitation (LKP), both of which are facing a harsh attack.

Those attacking are the French authorities who rule that Caribbean island from 5,000 miles away. The UGTG and LKP led the 44-day general strike in early 2009, which won significant wage and benefit increases for Guadeloupe’s working class.

The UGTG’s deputy secretary general faces trumped-up charges based on an accidental death of a young man whose motorbike crashed into a strike barricade four years ago. Three other unionists face equally dubious charges stemming from a labor action in 2006. The French government and the bosses also refuse to live up to the concessions they agreed to when the 2009 strike ended.

While Lapitre was in New York, WW interviewed him and listened to two radio interviews. This article is mainly based on information and quotes from those discussions.

“I’ve come here to seek international solidarity,” said Lapitre, “from trade unionists in the United States. This will be important for our defense and our victory. I’ve spoken with leaders in one of the Teamsters unions and we have connected with people on New York’s Central Labor Council.

“Guadeloupe is a French colony. They call it an “Overseas Department” (DOM), which means there are representatives in the French National Assembly, but the big decisions are made by a prefect, which means by the government in Paris, 5,000 miles away. These decisions are not in the interest of the 400,000 people of Guadeloupe.

“We made 130 demands on the bosses and government in 2009. They agreed to bargain on 20 of them. We finally ended the strike when they made some important concessions, which we considered a victory,” said Lapitre.

In an article published March 15, 2009, WW reported: “The Accord [on Guadeloupe] includes the following: a 200-euro ($260) wage increase per month; an average 6 percent reduction in the price of water; the hiring of 22 Guadeloupean teachers on the waiting list; measures to aid farmers and fishers, including the setting aside of 64,000 hectares (158,000 acres) of farmland for future use; lower bank service rates; lower interest rates on loans, which are still being negotiated; a housing rent freeze and ban on evictions; improvements in union rights through the appointment of mediators to resolve outstanding conflicts in some major industries; and provisions for cultural development.” (workers.org/2009/world/guadeloupe_0319/)

The 2009 strike aroused sympathetic solidarity struggles in Martinique and Guyane, also French “Overseas Departments” in the Caribbean region, and in Réunion island in the Indian Ocean.

Lapitre said that the French colonialists were reneging on all the concessions. In addition, there were regular layoffs of workers. “Now, unemployment affects 30 percent of the active work force and 60 percent of the youth. And they are going after our leadership. They hate that we beat them in 2009 and they want revenge. They want to punish our victorious union just like the slaveholders have always tried to punish the Haitians for having defeated Napoleon in 1804.”

In mid-January, three leaders of the Union of Health Care Workers (UTS) — affiliated with the UGTG — were summoned to appear before the Criminal Court at Guadeloupe’s capital, Pointe-à-Pitre, to face charges dating back to strike actions of 2006.

Deputy Secretary Charly Lendo of the UGTG will appear before the courts on April 8. He has been charged with indirect, involuntary manslaughter. Workers had set up some barricades in 2009. A young man crashed his motorbike into one of barricades and died. “Ten people involved in the barricade were first charged,” Lapitre told WW, “but nine were released. This important union leader was targeted.”

The UGTG, which celebrated its 40th anniversary of fighting for workers’ rights and for the independence of Guadeloupe on Dec. 5, will hold its 40th National Convention at the end of March and beginning of April. Three days after the convention’s last session, Lendo’s trial will begin. The UGTG would like it if a U.S.-based union organization could send one or more representatives to attend the convention and the opening of the trial and participate in a news ­conference.