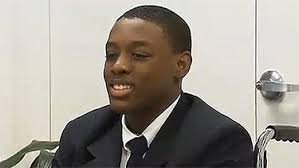 Philadelphia — Before her students left Mathematics, Civics and Sciences Charter School to play in a basketball game, Victoria Joyner gave them all hats and scarves to wear because the temperature on Jan. 7 was in the single digits.

A short while later, one of the students, 16-year-old Darrin Manning, was brutalized by the Philadelphia police, who claimed that Manning and his friends caught their attention as they stood near a subway stop because their faces were covered with ski masks and they were running.

Manning said his mind was on the game when he got off the subway near Broad Street and Girard Avenue with a dozen teammates in uniform. While his friends ran when the cops approached, he had been taught to respect the cops and he hadn’t done anything wrong, so he stopped and tried to comply with the cops.

Manning claims he was roughed up, placed in handcuffs, and that during a pat-down, a female officer pulled his genitals so hard one of his testicles ruptured. The next day, Manning underwent emergency surgery. Ikea Coney, Manning’s mother, stated that doctors say his injury may have left him sterile.

Speaking at a community rally in support of Manning at the Catalyst for Change Ministries in West Philadelphia on Jan. 24, Manning’s basketball coach Dan Jackson said he asked the youth why they ran from the police. They told him: “We are scared of the cops and we don’t know what they might try to play on you. They were all white and we are all Black.”

Manning, an honor student with no criminal record, has been charged with three misdemeanors, including resisting arrest. His mother is concerned that the criminal charges may jeopardize scholarships that he has already been awarded. Officer Thomas Purcell, the white officer who stopped Manning, has had two prior citizens’ complaints lodged against him for false arrests.

Manning’s family and his attorney Lewis Small are calling on Philadelphia District Attorney Seth Williams to file charges against the officers involved and to prosecute the female officer who illegally searched Manning for indecent assault of a minor.

This incident has sparked local and national outrage as yet another example of the epidemic of police brutality against Black and Brown youth across the U.S. In Philadelphia, the police department’s history of brutality has led to numerous lawsuits, including a 2011 case filed by the American Civil Liberties Union challenging police abuse of the city’s stop-and-frisk policy.

In a report issued in March 2013, two years after a settlement in which the city agreed to provide better training of police, the ACLU found that while the number of pedestrian stops had declined nearly 15 percent since 2009, stops without reasonable suspicion were still targeting ­African Americans and Latinos/as in 76 percent of the cases.

Just two months earlier, on Nov. 4, Temple University students rallied against police brutality in response to a string of beatings and assaults by campus police and Philadelphia cops. The organization People Utilizing Real Power called the action to encourage people to speak out against brutality in order to protect their communities after 23 people were killed or wounded by Philadelphia police in the first six months of 2013.

That rally on Temple’s North Philadelphia campus was surrounded by signs of rapidly encroaching gentrification. Numerous “luxury apartment” and newly constructed high-rise student housing units have pushed out longtime residents, who are mainly poor and Black.

The subway stop where police attacked Manning and his teammates is located just blocks south of Temple. ­Despite the bitter cold, over two dozen protesters, including members of PURP and several Temple students, gathered there on Jan. 23 to protest the police ­attack on ­Manning.

Several of the community activists who attended the Jan. 24 community rally also called for continued organization to resist the police brutality and to win justice for Darrin Manning. Gabriel Bryant, with the Askia Coalition against Police Brutality, stated that even if Manning had not been an A student, he did not deserve what he got. Bryant described the three-year intense struggle that won Askia Sabur’s release following a brutal beating at the hands of Philadelphia police in 2010.

Meighan Dorr described the culture in Philadelphia since police were able to jail Mumia Abu-Jamal over 30 years ago: “The police don’t care. They say, ‘Bring it on.’ We got schools closing at an alarming rate. We need to have some power.”

One young victim of the Philadelphia police stop-and-frisk policy, Anthony Torrance, described being stopped five times. He called police brutality an epidemic and urged those present to stand up and do something.