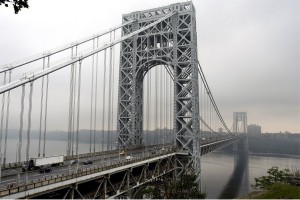 The sordid workings of bourgeois politics have been in the spotlight in the New York-New Jersey area for several months.

In early January, the story came out that Gov. Chris Christie of New Jersey had made a whole lot of commuters furious because his deputy chief of staff, working in cahoots with two Christie appointees at the Port Authority of New York and New Jersey, had arranged last September for the closing of two of the three entry lanes onto the George Washington Bridge in Fort Lee, N.J. The bridge is the main artery connecting New Jersey to New York.

For four days there was one hell of a traffic jam. Tens of thousands of workers couldn’t get to their jobs. Ambulances and other emergency vehicles got stuck and couldn’t respond to calls. Traffic backed up so far into Fort Lee that some kids couldn’t even get to school.

Why would Christie want to do such a thing? Because Fort Lee Mayor Mark J. Sokolich had refused to endorse Christie’s campaign for re-election — or so the story went.

Adding more spice to the tale was speculation over how this might damage or even torpedo Christie’s chance to get the Republican nomination and run for president in 2016. Christie himself, naturally, has denied any knowledge of what was going on. His underlings have either been fired or resigned, like the deputy whose email gloated over the planned closing: “Time for some traffic problems in Fort Lee.”

More than meets the eye

Perhaps one of the reasons this story received national attention was that it seemed to be a most risky and disproportionate retaliation — making Christie and his appointees look stupid as well as venal. Some media called the traffic tie-up a “crackpot scheme.”

But information has started to come out that puts “Bridgegate” in a new light.

What had been represented as the spiteful act of a peeved politician may have had a much weightier motivation: It appears that some of Christie’s corporate pals wanted him to lean heavily on Fort Lee Mayor Mark Sokolich because they needed the mayor’s okay on a development scheme worth at least a billion dollars.

Asking what could have motivated this enormous and planned traffic jam, Patrick McGeehan wrote in the Jan. 17 New York Times: “Just a block from the three lanes that usually funnel traffic from Fort Lee onto the bridge lie 16 acres of prime land that form the centerpiece of the borough’s grand redevelopment plan. Two neighboring projects there promise to spend about $1 billion to create a complex of luxury apartments, stores, offices and entertainment facilities.”

Assemblyman John S. Wisniewski, a leader of one of the state committees looking into Bridgegate, told McGeehan: “A real estate development of this size involves a lot of money. … The actions taken and the response that it generated are so disproportionate to the failure to get an endorsement from the mayor of Fort Lee that it raises my suspicion that this was done for some other reason.”

McGeehan says Wisniewski told him that the real estate developments were not a focus of the committee’s investigation. “But, as a real estate lawyer himself, he said he knew that the large sums of money involved in building often fueled corruption among elected and appointed officials. …

“That it could be the key to understanding why two executives at the Port Authority of New York and New Jersey — Bill Baroni and David Wildstein — would have schemed to disrupt traffic around the bridge for four days last fall ‘is as plausible a theory as any,’ he [Wisniewski] said.

“The only direct reference to the [real estate] developments in the documents gathered in the investigations so far,” adds McGeehan, “came in a desperate plea Mayor Sokolich sent to Mr. Baroni, who was the deputy executive director of the Port Authority, on Sept. 12, the fourth straight day that traffic was snarled in his borough.

“Near the end of the two-page letter, Mr. Sokolich asked, ‘What do I do when our billion-dollar redevelopment is put online at the end of the next year?’” (New York Times, Jan. 17)

Port Authority: playground for the banks

The Port Authority has always been a playground for New York’s wealthiest banks and real estate interests. Was the mayor, at his wit’s end over this manufactured traffic disaster, trying to placate the powers-that-be by asking them what he had to do to make this and future attacks go away?

The banks and corporations right now are sitting on trillions of dollars. They are desperate to invest this money where they are guaranteed a big return. A modern high-rise complex just two blocks from the GWB has their salivary glands working overtime.

Another New Jersey scandal fits the same pattern. Mayor Dawn Zimmer of Hoboken, N.J., another small city directly across the Hudson River from Manhattan, has told federal investigators that Lt. Gov. Kim Guadagno, a Christie appointee, threatened her with cutting funds provided by the federal government, but managed by the state, to rebuild after widespread destruction caused by Hurricane Sandy — unless Zimmer approved a “redevelopment” project in Hoboken favored by the governor.

And who is behind this Hoboken “redevelopment”? The Rockefeller Group, which built Rockefeller Center. It is represented by the law firm Wolff & Samson, whose head, David Samson, was appointed chair of the Port Authority by Christie.

While a few reporters for the capitalist media, like McGeehan, are digging around for more information about the role of Big Money in all this, most are content with seeing some political hacks’ heads roll.

Will the cutthroat billionaires of the Rockefeller Group be penalized for any of this? Never. This system is designed to send poor people to prison for 15 years for such “crimes” as selling a little marijuana. But the money men who, for example, get their underlings to bribe inspectors to keep unsafe mines and factories open, rarely get even a slap on the wrist.

Those receiving bribes, if they are small enough to actually need the money, might do a little time if they’re caught. But the millions of dollars that corporate donors shower on their chosen candidates at election time are perfectly legal. In effect, this money is bribery in advance for the anti-worker, anti-poor legislation the public servants of big business are committed to.

On the other hand, elected officials, especially those representing oppressed, working-class communities, are disproportionately the focus of racist “sting” operations and found guilty of allegedly taking bribes.

But when are the bribers ever punished?